The Japanese Yen rose against the US Dollar Friday, with the Australian Dollar taking a hit too, after US President Donald Trump ordered the consideration of $100 billion of additional trade tariffs against China.

In a statement, Trump said he wanted these in response to China’s ‘unfair retaliation’ to earlier trade-barrier proposals, and that he has instructed the US trade representative to identify likely target products.

The US said earlier this week that $50 billion in possible barriers were under discussion while China stuck back with proposals for increased tariffs on a range of US imports from aircraft to soybeans.

Friday’s news kept prospects of full-blown escalation toward trade war between the two countries very much alive. And it came just as Wall Street had risen for a third straight day on Thursday on hopes that the situation was cooling.

USD/JPY dropped from 107.50 down to 107 or so in the immediate aftermath of the statement, but remained above the figure. AUD/USD took a more modest but still palpable hit, likely because of Australia’s famed raw-material export links with China. 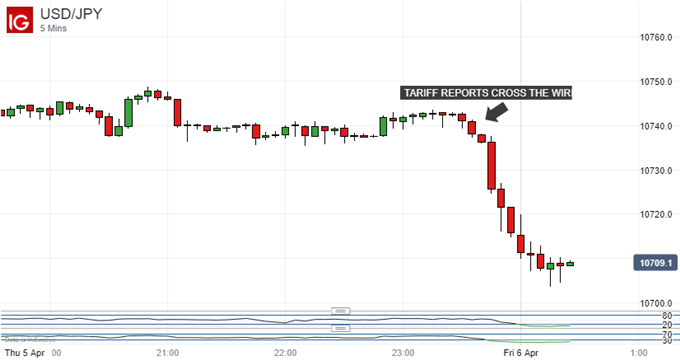 Asia-Pacific foreign exchange sessions are usually fairly muted on days such as this when official US labour-market stats fall due. The nonfarm payrolls release remains arguably the world’s most important single economic statistic but, as it comes after the local market close, its approach tends to depress activity.

However, trade tensions are now likely to make this a more than usually active pre-payrolls day. US stock futures tanked after the statement was released, with oil prices down too.