What makes the best stand out? DailyFX has been studying the Traits of Successful Traders.

Asian stock markets were mixed on Monday with the US Chinese trade spat still very much in focus.

It weighed on Chinese and Australian stocks throughout the session although a strong rise in US equity futures saw shares in Tokyo and Sydney reverse earlier losses to finish higher. The Nikkei 225 was up 0.7% at the close, having been down by more than 1% at one point. The Kospi was also in the green but Australia’s ASX 200 shed 0.5%.

Trade worries were kept front and centre by the weekend’s China Development Forum in Beijing at which Nobel-prizewinners Joseph Stiglitz and Robert Shiller forecast pain ahead for the US economy if tit-for-tat tariffs snowball. However, US Treasury Secretary Steve Mnuchin proclaimed himself optimistic in an interview that the two economic giants could reach agreement on trade.

The US Dollar was weaker for much of the session but showed some signs of life as the Asian session wound down. The US currency remains mired against the Japanese Yen, however despite the vast interest rate differential in its favour. USD/JPY is now down at lows not seen since November, 2016, with the downtrend channel from early January still utterly dominant on the charts. 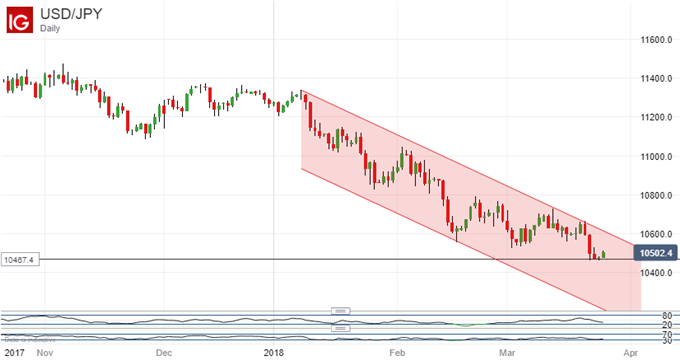 The New Zealand Dollar didn't get much of a lift from consensus-beating trade fugres, perhaps because its home central bank accepted a government mandade to consider maximum employment whle setting monetary policy. This long-flagged measure may mean that interest rates remain lower than they might have done without it.

The remainder of the session is short of likely economic crowd pleasers, with home loan data from the British Bankers Association the probably high point.