Asian markets were off to a poor start on Tuesday, echoing declines seen during the prior European and US trading session. In the former, ECB stimulus withdrawal fears sent stocks lower. In the latter, sentiment was hurt as technology shares dived on news that Cambridge Analytica got ahold of millions of Facebook users personal information without the firm’s knowledge.

During Tuesday’s Asia session, China’s Ministry of Commerce urged the US to correct the abuse of trade measures. The comment was in response to a developing story out of the world’s largest economy. There, newswires reported that President Donald Trump is planning to impose $60 billion of import tariffs against China. Keep in mind that just yesterday, China announced methyl isobutyl ketone duties on countries such as Japan. More of the same could follow if a trade war eventually ensues, potentially hurting stocks.

The Nikkei 225 was down as much as 0.80 percent in this risk averse trading environment. Things weren’t looking so hot in South Korea as well where the Kospi was underperforming. A similar story unfolded in Australia, the ASX 200 was also in the red. Not even Chinese exchanges were excused with the Shanghai Composite down as much as 0.26%.

On the currency side of things, you would expect the anti-risk Japanese Yen to be performing quite nicely. That was not the case. Earlier in the day, news that Japan sold an extra estimated 500 billion in 40-year notes weighed on their currency. Meanwhile, sentiment-linked currencies like the Australian and New Zealand Dollars suffered. Though the former got a small boost from the RBA minutes.

Looking at the remainder of the day, the UK CPI release is a prominent event risk. A potential downside surprise may put GBP/USD’s climb since the beginning of March at risk. In addition, do keep an eye out for the second day of the G20 meeting in Buenos Aires. On Monday, protectionism was a prominent theme that was brought up and more discussions of the sort are likely. 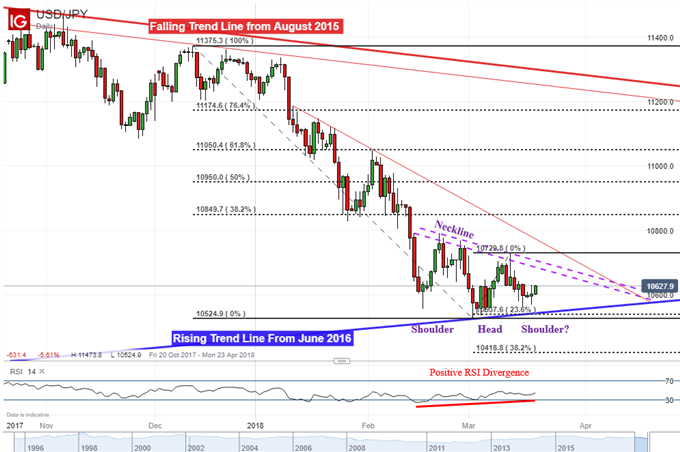 On a daily chart, USD/JPY seems to be supported by a rising trend line from June 2016. The pair has been falling for most of the first quarter and appears to be in the process of forming an inverse head and shoulders bullish reversal pattern. That, and its appearance has been accompanied with positive RSI divergence, hinting at ebbing momentum to the downside.

Form here, near-term support is the long-term ascending line that is closely aligned with the 23.6% Fibonacci extension at 105.37. A break below that exposes the 38.2% level at 104.18. If prices reverse course and continue pushing higher, the neckline of the inverse head and shoulders formation could be immediate resistance.