The Japanese Yen was hit Monday after data showing a much weaker trade surplus than expected and, probably more pointedly, some worrying about currency strength from the Bank of Japan.

The BoJ’s ‘Summary of Opinions’ from the previous monetary policy meeting on March 8 and 9 pointed to modest, balanced expansion in the Japanese economy – no argument there – but also to persistently weak wages and inflation which, while rising, remains some way below target.

The BoJ said that “there is no change in the judgement that it is necessary to continue pursuing powerful monetary easing with persistence so that highly accommodative financial conditions are maintained.”

All up this seems yet another rebuttal to the view of some in the market that Japan could see policy tighten before inflation gets to the 2% target level. The BoJ also said that inflation momentum is not strong enough for that target to be achieved anytime soon and, perhaps crucially, that if Yen appreciation and stock declines are prolonged then capital spending and consumption could be more restrained.

This overt worrying about the Yen’s strength may be what saw USD/JPY climb after the release. Be aware however that there is nothing especially new or surprising here and that the immediate market reaction could be a little overdone. 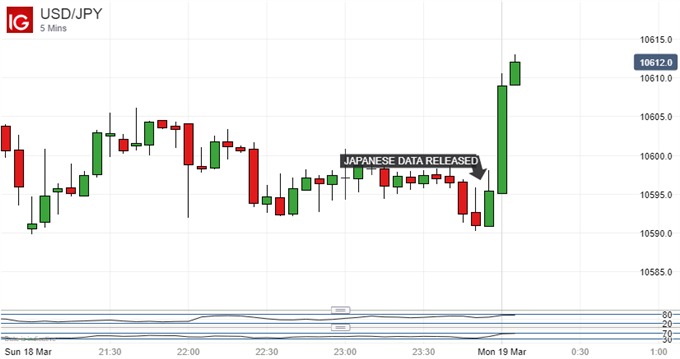 Released simultaneously, February’s trade surplus probably didn’t help Yen bulls’ cause. It came in at JPY34.0 billion (US$320 million). The markets had hoped for JPY89.1 billion, but may have got ahead of themselves given the all-too-likely trade distortions which often stem from the long Chinese Lunar New Year break.

The Japanese Yen remains in the clear ascendant against the US Dollar on the USD/JPY daily chart, where the long downtrend from the highs of early January remains very much in place.

However, that downtrend has faced a hiatus since mid-February, with broad range trade seen since between 107.31 and 105.21. That range has just seen another failed upside test, and is admittedly looking less and less like a platform from which US Dollar bulls can stage a meaningful turnaround. 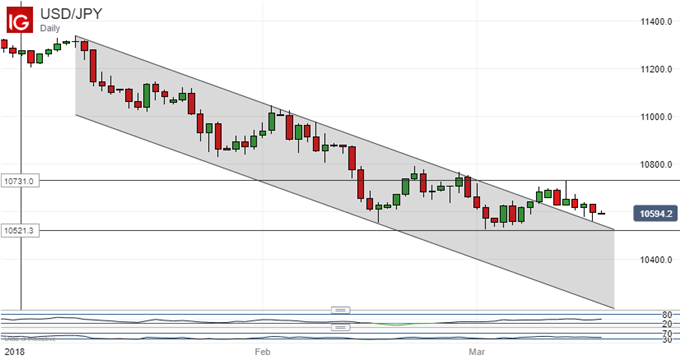 By the same token there is little to suggest that the range won’t also be respected to the downside, if tested so for the moment it’s probably still all traders have to play with.