NZD/USD Heading for a Reversal Pattern After Current Account Data?

The New Zealand Dollar maintained its cool despite worse-than-expected local current account data. In the fourth quarter of 2017, New Zealand’s balance was a deficit of NZ$2.770b versus NZ$2.450b expected. This narrowed from –NZ$4.833b in the third quarter.

Meanwhile as a percentage of GDP, the deficit took away 2.7% of growth which was the most since the first quarter of 2016. This was a bit more than the -2.6% estimate and higher than the -2.5% ratio from prior. Overall, the softer results here were mainly a result of increased investment outflows.

Perhaps a minimal reaction to the data was due to traders being hesitant on taking direction bias ahead of a more prominent event. The country will release the fourth quarter GDP statistics tomorrow. Not only is growth expected to rise at the fastest pace since 2016, but also the RBNZ has high hopes for it making an unpleasant surprise a potential risk for the New Zealand Dollar. 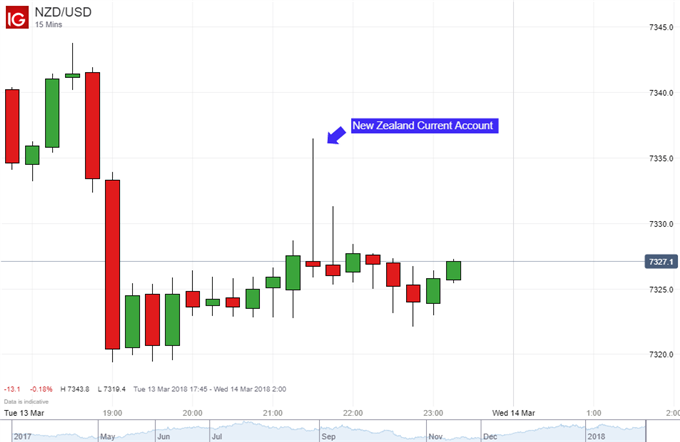 On a daily chart, NZD/USD seems to be pushing higher once again and is heading towards the September 2017 resistance line. The pair has tested this area twice since 2018 began and was unable to push through it both times. This could open the door for a triple top bearish reversal pattern to form.

From here, immediate resistance is the 23.6% Fibonacci extension at 0.7341 while a push above that exposes the aforementioned line. If NZD/USD turns lower, the 14.6% minor level at 0.7282 could act as near-term support. A push below that exposes the March 1st and February 8th lows. 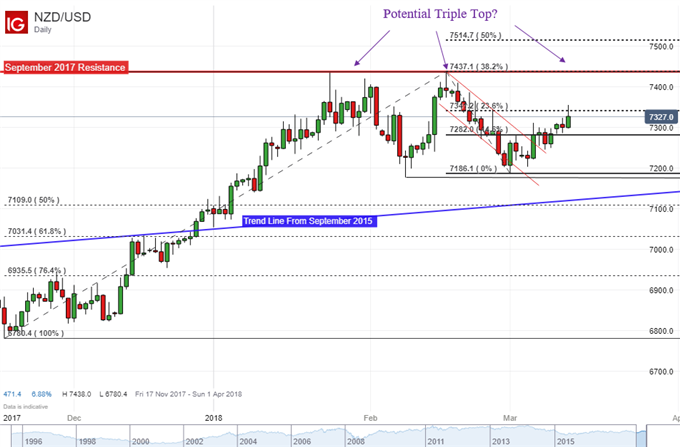