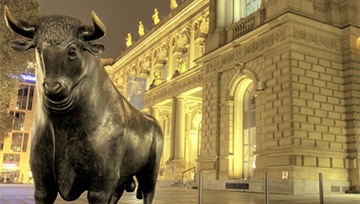 - The Euro-Zone economy continues to expand, with GDP growth hitting 2.7% year/year in Q4.

- That should keep the Euro on the front foot as the ECB ponders when to end its monetary stimulus measures.

The Euro-Zone economy expanded by a healthy 2.7% year/year in the final quarter of last year, keeping up the pressure on the European Central Bank to end the monetary stumulus it provides for the Euro-Zone economy later this year. That prospect should continue to support the Euro, especially as the ECB will likely follow the ending of its bond buying program with interest rate increases, although not for many months yet.

GDP growth in the fourth quarter was 0.6% quarter/quarter and data also showed industrial production in January up by a remarkable 5.2% year/year from an upwardly revised 3.7%. That was well above the expected 4.2% and came despite a drop to 0.4% month/month from an upwardly revised 1.3%. While the Euro was easier Wednesday, it is likely to resume its climb longer term as the end of the ECB’s asset purchase program comes closer.

Earlier, Germany also reported a healthy rate of expansion, with GDP growth of 2.9% year/year working day adjusted, up from a downwardly revised 2.7% although just below the predicted 3.0%. Italian GDP growth was less buoyant at 0.3% quarter/quarter and 1.6% year/year – both below both expectations and the numbers for the previous quarter.

Meanwhile, inflation in the bloc remains subdued, providing a headache for the ECB as an ending of its bond buying program would likely keep inflation below its target of below but close to 2%. Consumer price data from Germany, also released Wednesday, showed inflation at just 1.6% year/year in January.