The New Zealand Dollar enjoyed a boost towards the end of Wednesday’s trading session. It quickly sprinted towards the finish line, overtaking other currencies to become the best performing major versus USD on that day. What was responsible for such a burst of energy? The third quarter New Zealand GDP outcome.

The country’s economy expanded at 2.7% y/y which was much higher than the 2.4% estimated prediction. Quarter-on-quarter growth was in-line with expectations coming in at 0.6%. You didn’t have to look far to find additional surprises, all of which seemed to make today’s outcome not so impressive.

In November, the Reserve Bank of New Zealand painted a rosy picture of what it expects from the economy going forward. Not only did it see inflation hitting 2 percent sooner, but also the central bank sees growth strengthening. So from the perspective of the RBNZ, today’s GDP outcome actually fell below pace. So can NZD/USD maintain its push higher? Let’s see what the technicals have to say. 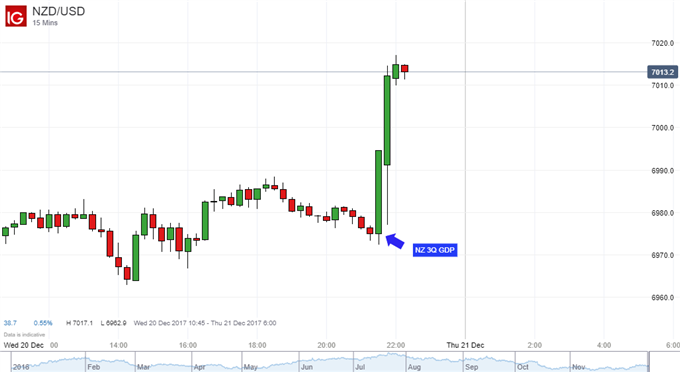 On a daily chart, NZD/USD has pushed higher since completing an inverse head and shoulders pattern in mid-December. However, since then, the pair has struggled with follow through. In fact, prior to this event, NZD/USD was falling slowly after getting stuck on a rising trend line that dates back to January 2016.

From here, the long-term trend line stands in way of immediate resistance. A push above that will expose the 38.2% Fibonacci retracement around 0.7076. A continuation of recent Kiwi weakness would put the former resistance now support line established since late October in view. A drop below that would place the November 17th low at 0.6777 in sight.

To add to that, the intraday IG client sentiment reading for NZD/USD now shows that traders are less net-long. The recent changes in sentiment warn that NZD/USD may soon reverse higher despite the fact that traders remain net-long. 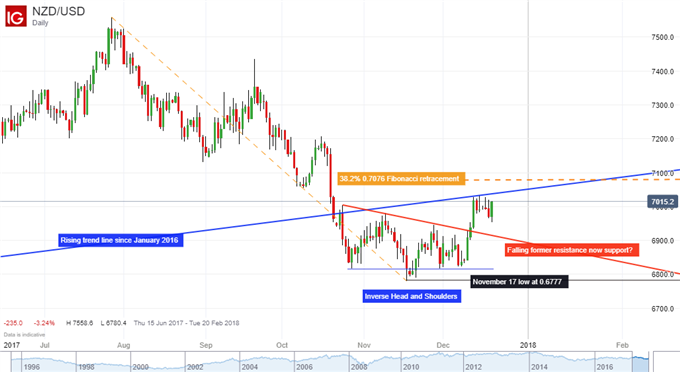