Australians were in for a jolly holiday surprise when the country experienced a very solid jobs report. This pleasant event helped push the Australian Dollar to quickly become the best performing major early into Thursday’s trading session. So what happened exactly?

The country added 61.6k employed positions in November, well above the 19.0k gain expected. This was the largest addition in a given month since October 2015, more than 2 years ago. The bulk of these gains came from the full-time sector which added 41.9k positions while part-time clocked in at +19.7k.

Another impressive aspect in this data was that the labor force participation rate surged to 65.5% from 65.2% in October (revised higher from 65.1%). We haven’t seen a rate like this in more than 6 years. This was as opposed to expectations of it falling to 65.1%. All the while, the unemployment rate held steady at 5.4% as expected. The country appeared to have no issue absorbing all of this extra labor power.

Not surprisingly, local front-end government bond yields surged alongside the Aussie’s gain. With the markets anticipating what could be one RBA rate hike towards the end of 2018, today’s jobs report appears to have made those odds more likely. For the central bank, employment seems to be heading in the direction it envisioned. However, it remains concerned about subdued wage pressures. 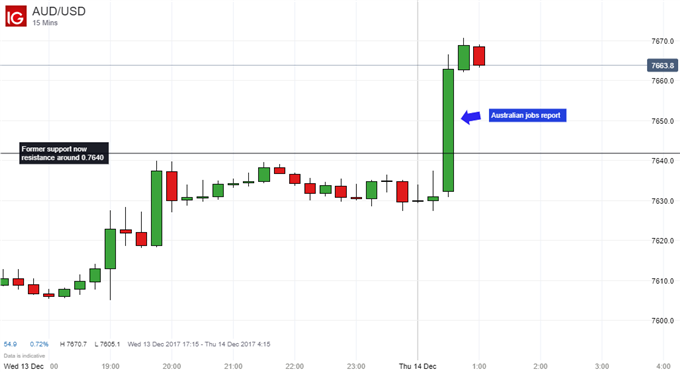 On a daily chart, AUD/USD has put in its largest gain since August 16th on Wednesday. It rose over 0.97 percent marking its best performance in about four months. This was largely thanks to the greenback’s decline despite rather hawkish 2018 Fed rate hike projections. The pair has been pushing higher since bottoming out on December 8th.

However, AUD/USD was struggling to push above former support now resistance around 0.7640 that was established back in late October. Today’s jobs report gave it that lift but can it hold it? A break above this line exposes the 38.2% Fibonacci retracement at 0.7739; and it could also mean that AUD/USD’s downtrend since early September might be in jeopardy.

To add to that, the intraday IG client sentiment reading for AUD/USD now shows that traders are less net-long. The recent changes in sentiment warn that AUD/USD may soon reverse higher despite the fact that traders remain net-long.

If Aussie Dollar turns lower, the June 22nd low around 0.7534 might once again come back into play. A break below this would put the December 8th low at 0.7500 in sight. 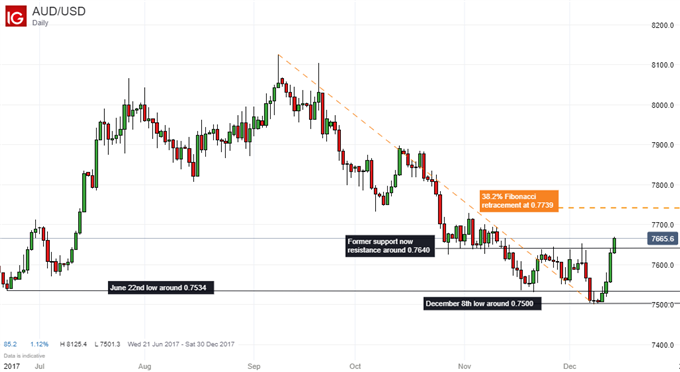