US Dollar Steady as FOMC Holds on Rates, December Rate Hike on Track

- FOMC holds benchmark interest rate in range of 1.00-1.25%, as was expected by markets (Fed funds futures were pricing in a 0% chance pre-meeting).

- Near-term Fed interest rate glide path remains unchanged from June 2017: another hike is expected in December, and three more are anticipated in 2018; markets only pricing in one hike for 2018 per Fed funds futures contracts.

The Federal Reserve surprised no one today when the FOMC announced they would keep the main overnight benchmark rate into a range of 1.00-1.25%, as was priced into the market well in advance of today’s policy meeting: there was a 0% chance of a rate move, per Fed funds futures contracts. The simple reality was that, given that this meeting would produce neither a new summary of economic projections nor a press conference for Fed Chair Janet Yellen, the FOMC wasn’t going to do anything to begin with.

Given this backdrop, it’s of little surprise then that a relatively vanilla policy statement has led to only a minor reaction in USD-pairs. To this end, it seems that the policy statement came in right on the nose. The policy statement indicated that the Fed believed economic activity was rising at “solid rate despite [the] storms,” which decimated the southeastern United States at the end of Q3’17. Elsewhere, the labor market “continued to strengthen,” while core inflation “remained soft.”

Overall, the Fed said it expects the economy to evolve in a way warranting “gradual rate hikes,” keeping December in the crosshairs for the next policy shift.

In sum, today’s statement can be seen as exactly than what markets were expecting ahead of time, given the outlook for another hike this year; Fed funds were pricing in a 70% chance of a third rate hike in 2017 ahead of the FOMC meeting today, where they remained afterwards as well. 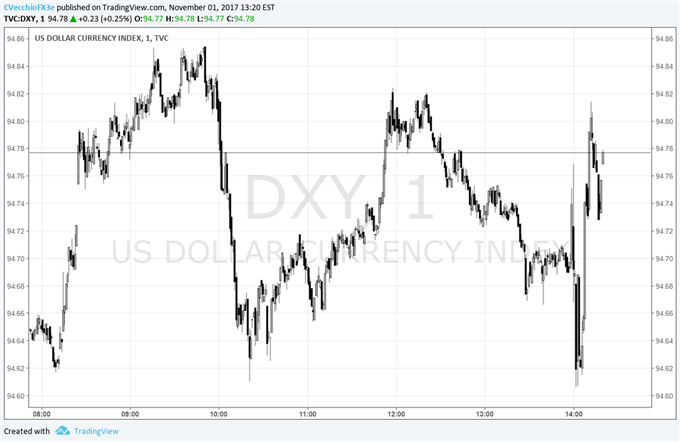 Immediately following the policy statement release, the US Dollar clawed back losses from earlier in the session, but made no significant progress one way or the other on the day. In fact, the DXY Index has been rangebound between 94.60 and 94.86 since 8 EDT/12 GMT. The DXY Index was trading at 94.78 at the time this report was written.

Follow updates regarding the Fed’s rate decision as well as other data and events moving FX markets in the DailyFX Real Time News feed.