Join Analyst Nick Cawley every Friday at 11:30 GMT as he discusses key events for the UK in the week ahead, Sign-up on the DailyFX Webinar Calendar and see what other live events are coming up.

The British Pound fell as much as half of a percent (75 pips) less than 30 minutes before Friday’s close as the rating agency Moody’s downgraded the UK’s sovereign credit rating to Aa2 with a ‘Stable’ outlook from its previous Aa1. The impact from the ratings downgrade was short lived due to a lack of liquidity, which seemed to temper the move as markets settled for the weekend. Despite the credit downgrade, the outlook for the UK economy is stable as Moody’s continues to see relative institutional and economic strength moving forward.

Moody’s offered two major justifications for the downgrade, citing their weaker outlook for UK’s public finances, and fiscal pressures resulting from the nation’s divorce from the EU. Moody’s sees weaker finances moving forward as the economic slowdown is accompanied by higher than previously expected government spending, and weaker revenue streams. The ratings agency also noted rising debt levels as the UK government’s fiscal spending expectations were revised from targeting a surplus in 2019-20 to keeping the deficit below 2% of GDP. Moody’s further expects the decision to leave the EU single market will have negative economic consequences for the UK, and will only put further pressure on the country’s debt levels.

One of Moody’s more provocative rationales for today’s downgrade was doubt that the UK government would be able to “secure a replacement free trade agreement with the EU which substantially mitigates the negative economic impact of Brexit”. The markets may have agreed with the rating agency’s sentiments regarding Brexit as the British Pound fell as Prime Minister Theresa May gave a speech outlining goals for the upcoming negotiations. GBPUSD fell following both the Prime Minister’s Speech and the credit rating downgrade. As the details of the split are debated, only time will tell if Moody’s cautious outlook and the market’s bearish reaction is warranted. 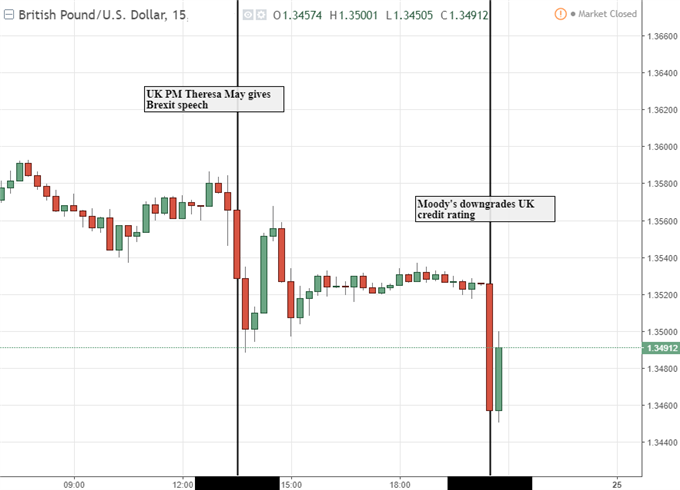 USD/JPY Latest: Jitters Around Intervention at the 145 Level, NFP Next
Advertisement