Why do some traders seem to have that magic touch? We’ve looked at over 40 million trades in search of an answer. Check out the Traits of Successful Traders

The Japanese Yen can now supply us with a chart so replete with key points that it looks like something out of a technical analysis textbook. But this USD/JPY picture is the real thing and, at least at face value, it makes miserable reading for any remaining bulls.

As we can see the pair is stuck in a venerable, gradual downtrend which has taken it from 2017’s highs all the way down to its lows where a quite doughty defense was mounted in the past week or so.

However, we can also see that last week’s bounce has topped out some way short of the previous meaningful peak (August 10’s 110.65) and that retracement is already under way. Can the year’s lows hold again if they come under new assault, as it seems very likely that they will?

Well, some signs are not propitious. USD/JPY has seen two bearish moving average crossovers in recent sessions. That is where a short-term moving average slips below a longer term one. Here you can see that problem writ large:

This suggests that the US Dollar is in quite deep trouble and that those annual lows could indeed give way on the next test.

The only word of caution here might come not from the world of technical analysis but from the fundamentals. The topping out process has coincidentally come just as US labor data have underwhelmed and as yet another report of North Korea nuclear testing sends investors scuttling for havens, hitting the US Dollar and bolstering the Yen.

It is just possible that the fundamentals are making the technical gloom deeper than it really is and that a snap back in risk appetite could brighten matters. If you’re currently uncommitted it can’t surely hurt all that much to see whether the year’s lows hold again before you get back in. After all, the first key support likely to tell that tale is 108.81, just around current levels. This week’s daily closes are thus likely to be most instructive. If they stay above that point then the year’s lows remain defended.

The British Pound meanwhile looked to have more conclusively broken its own downtrend against the Japanese currency last week. However, it too is showing signs of exhaustion which, if they continue, will see it post another lower high and possibly head back down. A cluster of near-term support looks vulnerable and if it breaks that will make the bearish picture much clearer.

The cross’ Relative Strength Index isn’t giving much away though, with the pound looking neither overbought or oversold at current levels. That said the path lower looks like the clearest one for the moment, even if it’s too early to say whether a more significant downtrend is reasserting itself. 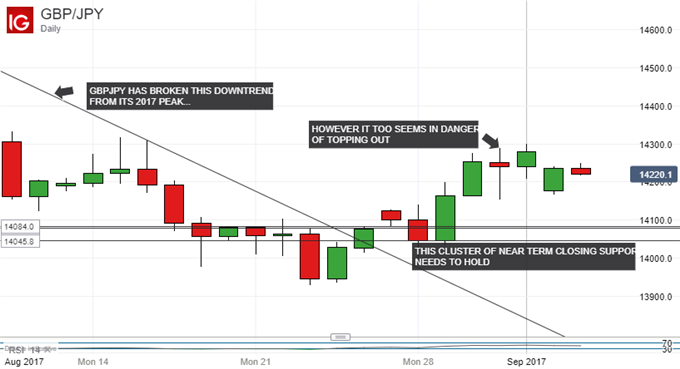