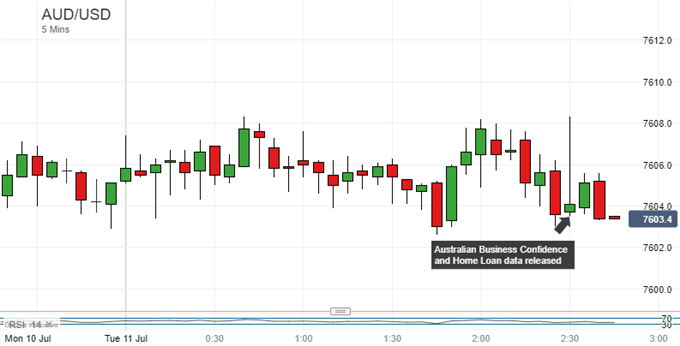 The new DailyFX quarterly forecasts are out. Check out those for the Australian Dollar and all the Asia/Pacific majors here.

The Australian Dollar was steady Tuesday on news that business confidence had picked up in its home country even as home loans underwhelmed.

The National Australia Bank June Business Confidence Index came in at 9, just above the revised previous figure of 8. However, the index gauging firms’ assessments of current conditions hit 15, well above May’s 11 and hugely above long-run average levels. Businesses seem more confident than consumers at this point, with Australia’s export machine running rather hotter than its high street. However, NAB said that the retail part of its survey was at last showing some improvement.

More broadly the lender said that there was scope to be hopeful that the official unemployment rate could come down at current survey levels, but that there remained a degree of slack in the labor market.

Loans made for home purchase rose by 1.1% on the month in May, according to official figures released at the same time. This was well below the 1.5% gain which markets had expected and nowhere near enough to reverse April’s 1.9% fall.

The Reserve Bank of Australia is keeping a close eye on domestic housing prices which, along with labor market conditions, appear to be its two major monetary policy drivers. The central bank declined to join other developed-market authorities last week by remaining neutral on its accommodative monetary settings rather than upping the hawkish rhetoric.

The Official Cash Rate remains at its 1.50% record low and is thought likely to stay there for the remainder of this year and well into next.

Overall none of this data will move the dial on policy forecasts, encouraging though it is in the round for the Australian economy. AUD/USD saw an initial uptick on the numbers but overall reaction was muted. The bottom line for now is that the US is tightening policy while Australia isn’t.