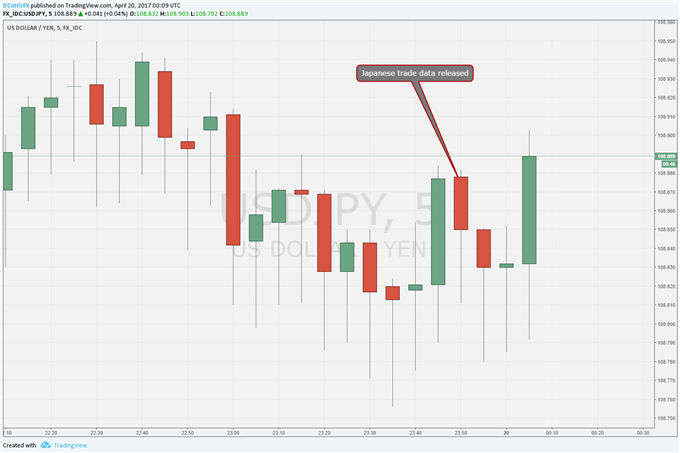 Would you like to know more about financial-market trading? The DailyFX free trading guide is for you.

The Japanese Yen was steady against the US Dollar Thursday following the release of official trade data which showed Japan’s export machine in fine form and imports rising sharply too.

The overall visible trade balance for March was JPY614.7 billion ($5.7 billion). That was well above the expected JPY605.65 billion, but below February’s JPY813.4 billion. The adjusted overall balance was JPY172.2 billion.

Behind the headlines imports rose 15.8% on the year in March, hugely ahead of the 10.2% markets were expecting. Exports surged 12%, making an even greater nonsense of 6.2% forecasts. The largest rise was seen in exports to China, which rose 16.4%, but shipments rose to every major economic region.

However, this quite robust data had little impact on a USD/JPY pair currently concerned more with geopolitics than with numbers. The greenback continued to bump around the mid-to-high JPY108 area, which seems to be holding as the lower bound of its long fall from the 114s in mid-March.

Earlier in the session, Finance Minister Taro Aso reportedly said that Japan must eventually raise taxes, cut healthcare and pensions while pursuing steps to raise inflation and slash Japan’s vast public debt, but he has said such things before and markets do not feel that such action is imminent.

Earlier still a monthly poll of manufacturing sentiment from Reuters found firms more upbeat than they have been since the financial crisis days of 2008. The poll tracks the official “tankan” survey.