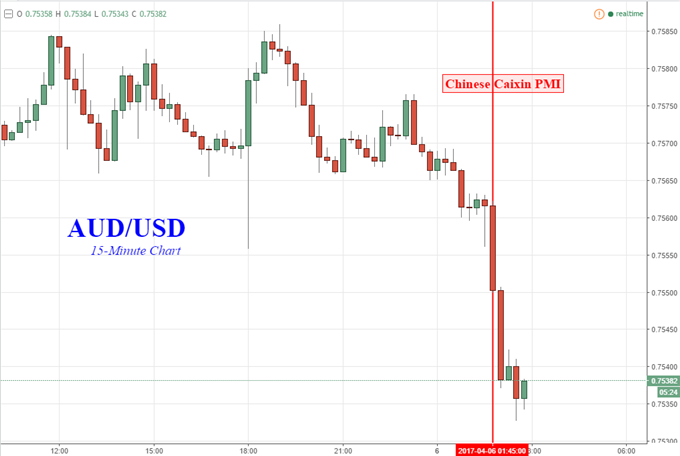 Australian Dollar Ticks Down Along With Caixin China PMI Data

The Australian Dollar ticked lower against its major counterparts following the release of the Caixin PMI readings. Note that a report above 50 indicates expansion while a reading below 50 points to a contraction.

The private sector composite measurement clocked in at 52.1 in March compared to 52.6 in February. Meanwhile, the services reading dropped to 52.1 from 52.6 prior. This marks a third month in a row that the services PMI recording declined from the 2016 high of 53.4 in December. Both of these figures fell to their lowest levels since September 2016, a 6-month low.

Since China is Australia’s largest trading partner, economic news-flow from the former country often implies knock-on effects on the latter, triggering a response from the currency. The descent in the PMI measurements also does not bode well for China’s aspiration to become a more consumption-based economy like its G10 brethren.

Looking ahead, President Donald Trump’s meeting with China’s counterpart Xi Jinping today stands to be one of the more relevant risks for sentiment. As Senior Currency Strategist Ilya Spivak mentioned, worries about escalating tensions between the world’s top two economies may weigh on market-wide risk appetite. One of the more sensitive currencies to such noise can be the relatively higher-yielding Australian Dollar.