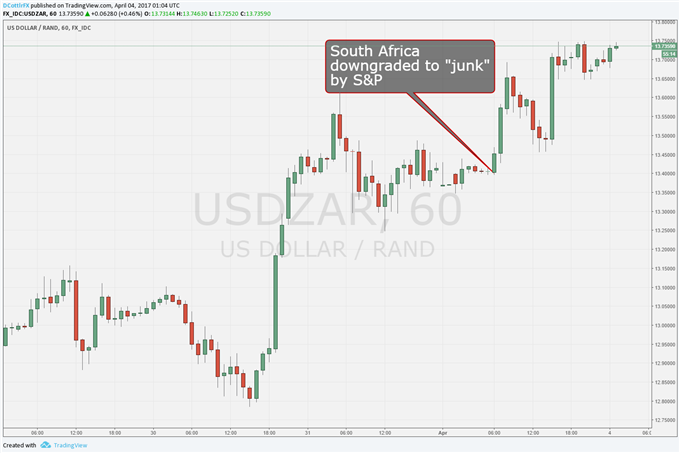 South Africa’s Rand remained under heavy pressure into Tuesday’s Asian session after one rating agency stripped the nation of its investment-grade status late the day before.

Standard & Poor’s cut its rating to “double B plus” from “triple B minus”, taking South Africa below the line which separates investment-grade credit from the non-investment grades, popularly known as “junk”. S&P’s outlook on the country’s credit is negative. Peer Moody’s is set to give its assessment on Friday.

Last week’s dismissal of respected former finance minister Pravin Gordhan by President Jacob Zuma and the subsequent cabinet reshuffle has been behind the Rand’s slide and loss of investor confidence. The move has been criticized by business leaders and from within the ruling African National Congress.

Having been up as much as 12% against the US Dollar at one point this year, the South African currency has now notched up a 10% fall. The greenback now gets you nearly 14 Rand, from the 12 or so it bought before the current political turmoil hit. The African currency had been a popular “carry trade” target this year, with investors borrowing at low interest rates in developed markets to invest in the better returns on offer in emerging markets.

Sadly for South Africa this “hot money” has every reason to quit around when things get tough, and so it seems to have done.

A heavy beating: Rand swoons against the US Dollar

Still, the Rand has seen sharper falls and may yet recover, at least somewhat, assuming all bad political news is now in the price. If it isn’t, or if there’s clear evidence that investment outflows are picking up pace, then its bad times could be just beginning.

Which currency carries investor hopes, and which is struggling to keep faith? Check out the DailyFX sentiment page