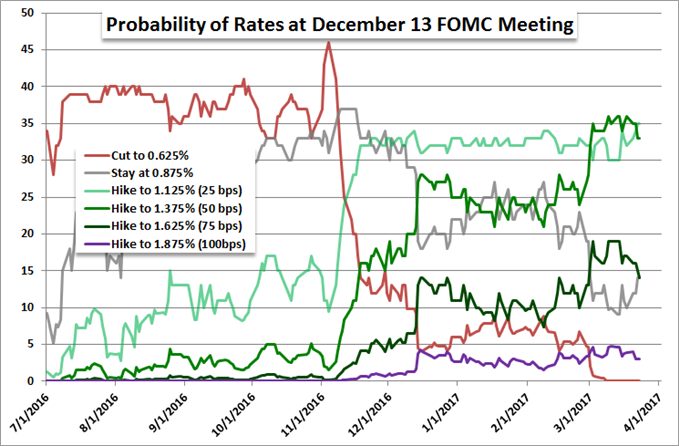 The US Dollar was unimpressed by the latest round of Fed speakers despite some rather hawkish comments particularly from Boston Federal Reserve President Eric Rosengren. Rosengren stated that he was in favor of a rate hike at every other FOMC meeting this year, which would translate to a total of four. However, the Boston Fed President's default view has held consistently that four hikes should be the Fed’s pace unless data proved otherwise, so today’s comments appeared to be of little surprise. This may explain the muted market response after such obviously hawkish comments.

Fed’s Evans and Williams delivered comparatively moderate statements, essentially holding the 3-hike policy tempo that the FOMC projected at the December 2016 and again March 2017 SEPs (Summary of Economic Projections). Evan’s maintained a slightly more dovish view, stating that he supported another one to two hikes this year. William’s left the door open for a more hawkish interpretation saying that he sees the possibility for more than 3 hikes in 2017 given upside risk.

With reference to this spectrum of forecasts from the Fed members, the market itself still shows considerable speculative weight calling for an additional three and even four additional hikes in 2017. While the probabilities afforded those more aggressive views are significantly lower overall, it suggests there is still a speculative stretch to the current market bearings – from Dollar to S&P 500 – when it comes to monetary policy. Merely keeping to the existing FOMC forecast could therefore promote a shift in market view and price.