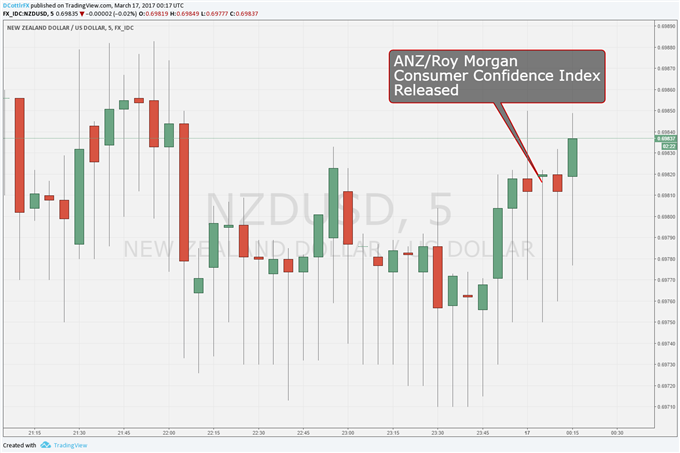 The New Zealand Dollar was steady Friday despite a mixed morning of local data releases.

The March consumer confidence index from lender ANZ and research firm Roy Morgan slipped 1.7% on the month to 125.2. This is an acceleration after February’s 1% slide. However, ANZ argued that all was not as gloomy as it seems.

It said that consumer sentiment continues to “march along” although both the headline and seasonally adjusted indexes eased in March. Spending trends and economic momentum continue at a “good tempo,” it went on. Inflation and house price expectations were little changed.

The data came after news that New Zealand’s manufacturing sector expanded strongly in February. The Performance of Manufacturing Index came in at 55.2 for the month, well above January’s revised 52.2. This series is analogous to the Purchasing Managers Indexes (PMIs) released globally. Any reading above the 50 line signifies sectoral expansion.

The index is now at its highest level since last September. Business New Zealand publishes the survey and said that new orders’ notable strength helped the generally positive tone. However it also noted regional “patchiness” in the data which it called overall a “good set of numbers.”

The New Zealand Dollar gained on its US cousin as markets evinced disappointment that the US Federal Reserve wasn’t more “hawkish” on interest rates after raising them on Wednesday. However, it has given back some of those gains since.

It didn’t move much on the latest date. NZD/USD initially slipped but it soon returned to hovering about the 0.68920 area.

Would you like to know more about financial-market trading? Check out the DailyFX webinars.