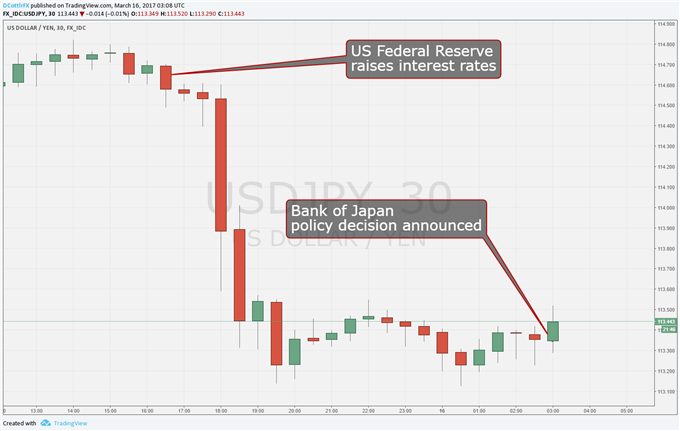 The Bank of Japan left all its key monetary settings on hold Thursday, as it was expected to. That leaves the short-term interest rate target at -0.1%, the ten-year Japanese Government Bond yield target around zero percent while yield-curve control remains in place.

The pledge to increase stimulative JGB holdings by JPY80 trillion ($775 billion) annually stays, as does the prognosis of moderate recovery overall

As ever there were dissenters. BoJ Board Members Takehiro Sato and Takahide Kiuchi opposed yield-curve control (again). Mr. Kiuchi daringly proposed saying that “inflation was extremely slow” but no one else on the nine-member panel agreed with him.

The Japanese Yen had already risen sharply against the US Dollar following the US Federal Reserve’s Wednesday decision to raise interest rates. The central bank hiked the Fed funds target rate and stuck to its expectation of two more increases this year. This disappointed some US Dollar bulls who had hoped for a dash more hawkish hot sauce.

USD/JPY fell from 114.74 to 113.15 in the wake of the Fed, and has bumped along that bottom ever since. It pulled up a little after the BoJ headlines crossed the wires but not to any great extent.

Up, but not much. USD/JPY

Bank of Japan Governor Haruhiko Kuroda will meet the press to discuss Thursday’s decision at 06:30 GMT.

It may be your favorite currency, but who shares your affection? Check out the DailyFX sentiment page to find out.