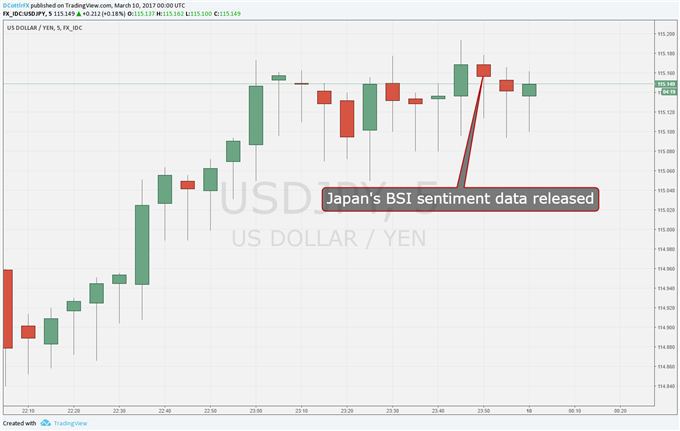 The Japanese Yen was steady on Friday despite news of some weakening in business confidence.

The Business Sentiment Index for all industries came in at 1.3 for this year’s first quarter, according to the Ministry of Finance. That was well below 3.0 level from the quarter before. The score for large manufacturers alone was 1.1, hugely below the 7.5 level chalked up in the last three months of 2016.

One bright spot was that both surveys remain in positive territory (that indicates that businesses see conditions improving, just not to the extent they did when last asked) Another is that service sector confidence appears to be holding up.

These numbers can provide a steer as to the official Tankan snapshot of major manufacturers, which usually comes about a week later. USD/JPY barely moved however, continuing to hover around the 115.50 area.

Perhaps we shouldn’t be surprised. Global markets are looking toward official US labor market statistics due later in the global session. A rise of 200,000 nonfarm jobs is expected for February. That or anything like it would probably set the seal on a March interest rate rise in market minds, as recent Federal Reserve commentary has pointed that way.

With those US data as the main event, Japanese business sentiment was only every going to be a warm up act, and so it proved.

Would you like live coverage and analysis of major market-moving events, or just to know more about trading? In either case, the DailyFX webinars are for you.