US Dollar Unfazed by US Trade Balance Deterioration in January

- US Trade Balance for January came in matching forecasts at -$48.5 billion.

- The market is looking towards the upcoming US labor market reports at the end of the week.

As traders look towards the upcoming US Nonfarm Payrolls report on Friday, trade data from January has offered little good news. The US Trade Balance came in as forecasted at -$48.5 billion, nearly a 10% increase from the -$44.3 billion deficit seen in December 2016. Exports in January ticked up by $1.05 billion to $127.95 billion from $126.9 billion in December, while imports also rose in January by $5.08 billion to $197.64 billion from $192.56 the month prior.

The trade balance, net exports, is a component of gross domestic product and is one of the biggest components of the US’s balance of payment. This economic indicator gives insight on the value of the dollar. When exports are greater than imports US experiences a trade surplus. Conversely, when imports exceed exports the US experiences a trade deficit. A strengthening US Dollar encourages American consumers to import more from abroad, while also discouraging foreigners from purchasing American-made goods as they become more expensive, relatively speaking.

Markets largely ignored the release of the Trade Balance considering there was no surprise in the print figure. More importantly, the US Nonfarm Payrolls report will be released this Friday, which is the last piece of data the Fed will assess prior to the FOMC meeting next week. Fed Chair Janet Yellen stated last week “given how close we are to meeting our statutory goals, and in the absence of new developments that might materially worsen the economic outlook, the process of scaling back accommodation likely will not be as slow as it was in 2015 and 2016.”

In sum, so long as we do not see a big negative surprise – a print below +100K, for example - we can expect the Fed to hike rates next week. As for the US Trade Balance, if the Fed continues on the path to normalizing monetary policy we can expect exports to decrease amid a stronger and more expensive dollar, this will in effect serve to exacerbate the trade deficit.

Senior Currency Strategist Christopher Vecchio will be covering the US labor data live on Friday, March 10 at 8:15 EST/13:15 GMT – you can register here.

Here’s a summary of today’s US economic figures: 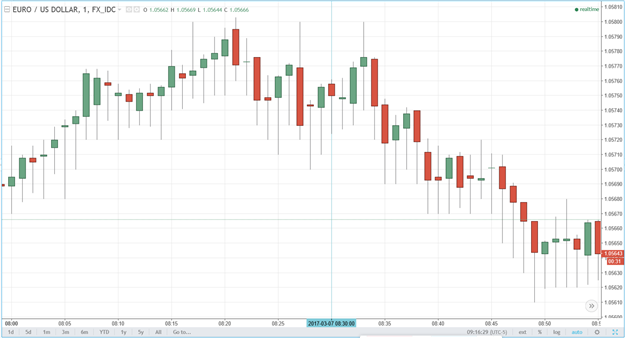 Immediately following the data, the US Dollar was flat against the Euro, though the pair continued along with its daily trend of modest losses soon after. EUR/USD dropped from 1.0576 ahead of the release to as low as 1.0575 thereafter. At the time this report was written, the pair was trading at 1.0563.