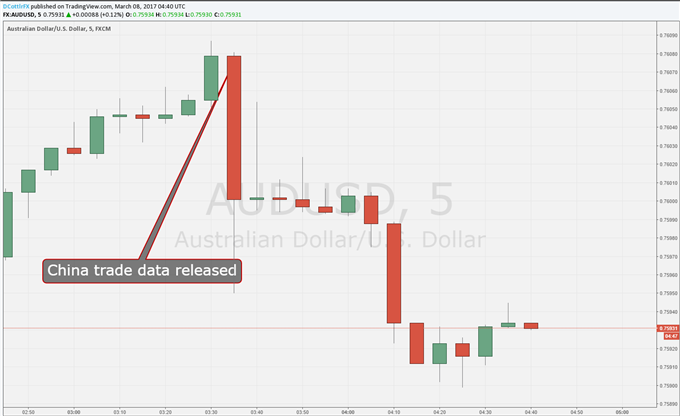 The Australian Dollar fell on Wednesday following news of a shock trade deficit in China, the first since 2014.

China’s official trade balance for February was a deficit of CNY60.4 billion. This made a mockery of forecasts for a surplus of CNY172. 5 billion. Chinese imports surged an astonishing 44.7% on the year, almost doubling forecasts.

Exports meanwhile rose by 4.1%, hugely less than the 14.6% rise expected. However, the data come after a blockbuster trade surplus in January, and are also probably skewed by the relatively early timing of China’s long, Lunar New Year break in 2107. As such they may not rattle markets much beyond the initial surprise value of a deficit here. But that surprise is considerable. China has not posted a monthly yuan-terms deficit since February 2014.

News of soaring imports should also perhaps hearten China bulls as clear signs of the increased domestic demand which policy makers have long wanted to see. Still, the Australian Dollar weakened after the numbers, possibly as investors were stunned by a rare trade deficit. The currency often acts as a liquid proxy bet on the Chinese economy thanks to Australia’s huge export links with China.

News of this rare month of trade deficit comes at a fascinating point for US/China relations. The Administration of US President Donald Trump has persistently attacked countries which run large trade surpluses. This usually includes China, and indeed China’s trade surplus with the US remains vast.

However, while it’s far too early to call Wednesday’s data any sort of trend, it does at least show that even China’s trade surplus is not a carved-in-stone part of the global economy.

The Chinese statistics office usually publishes the US-Dollar-terms trade data shortly after the initial, Yuan-terms version, but had not done so for February by 445 GMT on Wednesday.