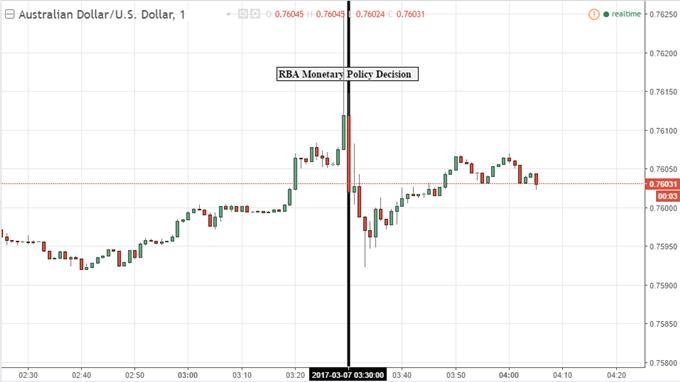 See how retail traders are positioning in the Australian dollar using the DailyFX SSI readings on the sentiment page.

The Australian Dollar initially fell nearly a quarter of a percent following the Reserve Bank of Australia’s decision to leave the cash rate unchanged at 1.50 percent. However, that drop would not last long with the market’s leveling out the drop as markets digested the event. Australian bond yields were little changed following the monetary policy meeting.

The RBA has kept the key interest rate at 1.50 percent since it was lowered to this level in August 2016 from 1.75 percent. Probabilities of an Interest rate hike (a shift from anticipation of further easing through as recently as 2016) increased roughly 2 percent points from 9 to 11 percent by September and 11 to 13 percent as of December of 2017.

Following the template for previous meetings, the RBA noted the strength of the Chinese economy during the second half of 2016, citing higher infrastructure spending. The RBA stated that Australian economic growth was around two and a half percent in 2016, as exports and non-mining investment have risen over the year.

The RBA reiterated that the low level of interest rates has supported the outlook and the depreciation of the currency has assisted the economy during its transition away from the previous mining boom. The RBA also restated that an appreciating Australian dollar would complicate the transition of the economy – a familiar trope for this and other trade-oriented regions.

Consumer and business confidence were notably at, or above average levels, although the RBA noted that household income continues run a slow pace. Labor costs continue to see a lack in growth, as the RBA sees inflation remaining low for some time. However, the bank does expect headline inflation to reach above the 2 percent lower threshold of its target range over the course of 2017.

The RBA’s monetary policy statement today was little changed from their February meeting, where they also left the cash rate unchanged.