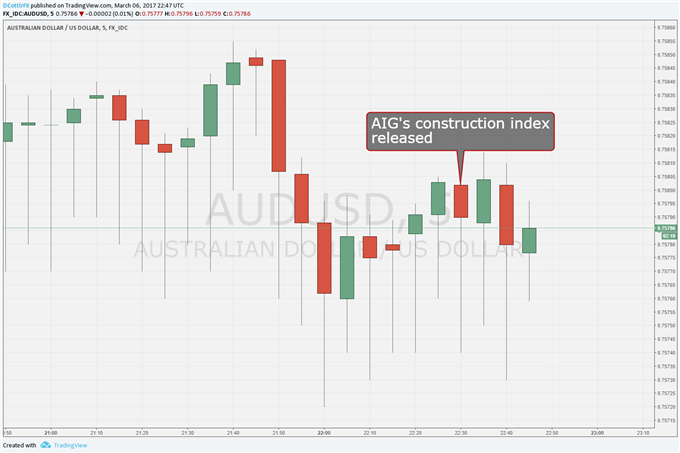 The Australian Dollar was steady early in Tuesday’s Asia/Pacific session despite cheery news that the construction sector had returned to growth in February.

The Performance of Construction index from the Australian Industry Group (AIG) shot up to 53.1 for the month, from January’s 47.7. The series identical to the Purchasing Managers Indexes published worldwide. Any reading over 50 signifies an expansion in the sector, while one under that means contraction. This is the first time the AIG index has been above that key 50 level since September, 2016.

The Australian Dollar market is awaiting an interest rate decision from the Reserve Bank of Australia on 0330 GMT Tuesday, which may have blunted the impact of this ostensibly quite bullish data. The RBA is not expected to alter its monetary policy settings although the accompanying commentary will be of great interest given the recent stronger tone of Australian economic data, which this latest construction snapshot continues.

A return to form for commercial rather than residential construction may well be pleasing to the central bank, as it suggests some buoyancy of business investment.

AUD/USD has taken a knock in recent sessions, thanks largely to the more hawkish tone of US Federal Reserve officials. The market has become ever-more confident that US interest rates will rise this month, and then continue to so as 2017 wears on. In contrast the RBA is not expected to alter its own record low Official Cash Rate for a very long time. Indeed, some forecasters think it may not rise until well into 2018.

Want to know more about trading the financial markets? Take a look at the DailyFX trading guide.