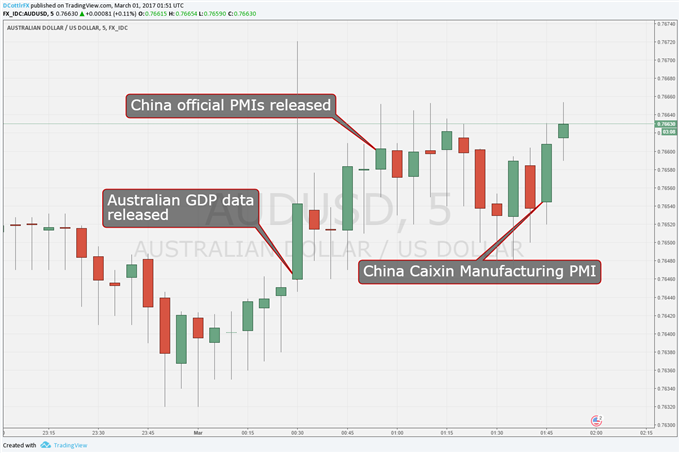 The Australian Dollar ticked up but remained confined to a tight range Wednesday following the release of another strong Chinese manufacturing survey.

The private Purchasing Mangers’ Index (PMI) for the sector from Chinese media group Caixin came in at 51.7 for February. That put it above both January’s 51.0 and the 50.8 which markets had expected. In the logic of PMI surveys, any reading above 50 indicates an expansion in the sector compared to the previous month. A reading below that means contraction.

The data came on the heels of official PMI surveys for the same month released earlier Wednesday. They also showed that manufacturing activity expanded faster than expected. The PMI for that sector came in at 51.6. That was a three-month high and well above market expectations (51.1). China’s industrial firms continue to benefit from higher sales prices and a construction-fueled recovery in demand.

However, the official service-sector snapshot showed the pace of acceleration there slowing slightly from the previous month. The PMI was 54.2 in February, from 54.6 in January. The official PMIs concentrate on China’s large concerns, most of which have high state involvement. Meanwhile the Caixin version looks at smaller, private firms.

The Australian Dollar didn’t react strongly to the numbers. It often acts as the markets’ favored liquid China proxy thanks to Australia’s strong commodity export links with the world’s number-two economy.

However, activity was possibly muted by the wait for US President Donald Trump’s major policy speech to Congress, as it has been in other assets. The speech was due to start shortly after the data were released.

The currency showed relatively little reaction even to admittedly well-flagged news that the Australian economy had avoided technical recession and expanded strongly in the final three months of 2016.

Awaiting the Pleasure of the President? AUD/USD

It may be your favorite currency, but who else cares? Check out the DailyFX sentiment page for a steer.