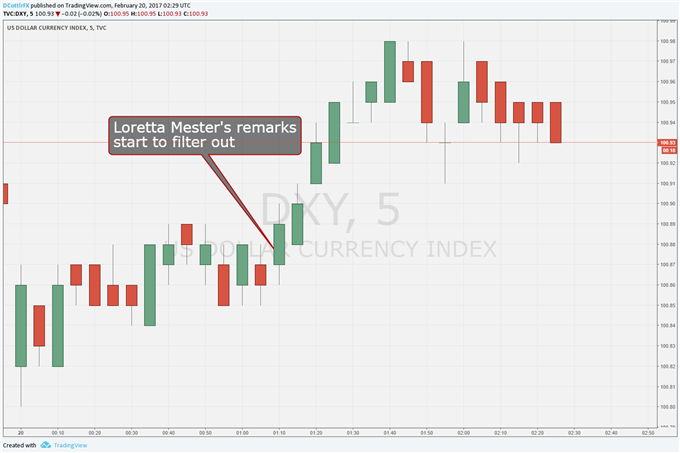 US Dollar Up as Fed's Mester Says Economy on Sound Footing

The US Dollar rose in Asia/Pacific trade on Monday thanks to some upbeat remarks from a member of the Federal Open Market Committee.

Speaking in Singapore, Cleveland Fed President Loretta Mester said that the US economy was on a “sound footing.” She was addressing the Global Interdependence Center. This non-profit organization promotes free trade and is holding a one-day banking conference in the city state.

Mester reportedly declared herself comfortable with rates “going up over time,” denied that the Fed was behind the curve and put some focus on the normalization of monetary policy. She reiterated that the Fed expects to reduce its holdings of mortgage-backed bonds and return to an all-Treasury holding.

“The return to primarily Treasuries will take some time, but it will be welcome because it may help to guard against future calls for the Federal Reserve to enter into the realm of fiscal policy,” Mester reportedly said.

Mester does not have a vote on the FOMC until next year, but is characterized as among the more “hawkish” members. This means that she is inclined to prioritize the battle against inflation. Such a position contrasts with the “dovish” tendency which may take other factors more into account. She has in the past favored a faster pace of interest-rate hikes than the consensus at the central bank.

Mester also wondered aloud whether monetary policy could do any more to help the US labor market. This sort of commentary is quite common from developed market central banks at which historically low interest rates prevail. It implicitly puts the onus on governments to do more via fiscal policy to support employment growth.

In any case, the US Dollar ticked up following her remarks. The US Dollar Index rose from 100.86 up to 100.96 after Mester spoke. The index tracks the greenback’s progress against a trade weighted range of currencies. However, markets will be thinned on Monday by public holidays in the US and Canada, which may have magnified the move.

At bottom Mester’s comments did nothing to alter the view that the Fed still intends to raise interest rates this year, and that its base case is for three, quarter-percentage-point increases.

We’re into the second half of the first quarter now. How are the DailyFX analysts’ forecasts holding up?