Hiring accelerated sharply last month in Canada indicating that the economic recovery has picked up momentum following the recent rebound in oil prices –a top export for the country.

In its monthly Labor Force Survey, Statistics Canada reported that December net employment increased by 53.7k due to gains in full-time work. A survey conducted by Bloomberg News showed that analysts expected to see 2.5K job losses. Despite the blockbuster employment report, the unemployment rate edged higher to 6.9%, in line with consensus, from 6.8% as the participation rate improved and rose to 65.8% from 65.6%

The details of the labor survey revealed that full time employment increased by 81.3K and was offset by a decline of 27.6K in part-time positions. The creation of more full time jobs, however, represents encouraging news and suggests that the quality of employment opportunities is improving.

Despite the strong payroll numbers in Canada, it is still too soon to say the economy is out of the woods and that Bank of Canada will abandon its neutral stance when it comes to monetary policy. Until there is concrete and consistent evidence that the economy is on a sustained path to recovery and that inflation will converge to the 2.0% goal, it is likely interest rates will remain accommodative.

Here’s a summary of the US data: 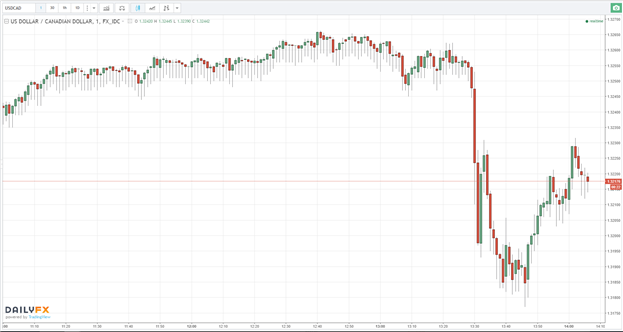 Immediately after the data, USD/CAD fell as low as C$1.318 as the Canadian Employment report boosted confidence that economic conditions are improving in the country and that the Central Bank may not have to maintain on overly accommodative monetary policy stance. At the same time, CAD also received a boost from a weaker-than-expected US Dec NFP report that came in at +156k. At the time, this report was written, however, USD/CAD had settled around C$1.3213, with the greenback losing 0.10% against the loonie in intraday trading.

Read more: Preview for NFPs as US Dollar Starts to Lose Traction