- Germany’s jobless total fell by more than expected in December, while inflation more than doubled.

- In response, German government bond yields are climbing, potentially supporting the Euro near-term, although politics rather than economics continue to be the currency’s main driver.

Germany’s jobless total fell by a seasonally-adjusted 17,000 in December, more than three times the 5,000 drop expected, and inflation jumped – lifting German bond yields and suggesting that the Euro could rally near-term after two days of declines against the US Dollar. The German unemployment rate remained at 6.0%, staying at its lowest level since German reunification in 1990, and a record 43.4 million people were employed in Europe’s largest economy in 2016.

Data released Tuesday also showed that German inflation more than doubled to +1.7% in December from 0.8% the month before, adding to the evidence that the country’s economy is expanding healthily. Figures released the day before by IHS Markit showed Germany’s manufacturing purchasing managers’ index, or PMI, rose to 55.6 in December from 54.3 in November – its highest level since January 2014.

Against this background, there was a solid rise in German government bond yields Tuesday, with the yield on the benchmark 10-year issue edging up to 0.24% from 0.19% the day before – when it was at its lowest level for almost two months. There was no immediate response from the Euro, which fell against a strong US Dollar for the second successive day and eased below the 1.0400 level for the first time in four sessions. 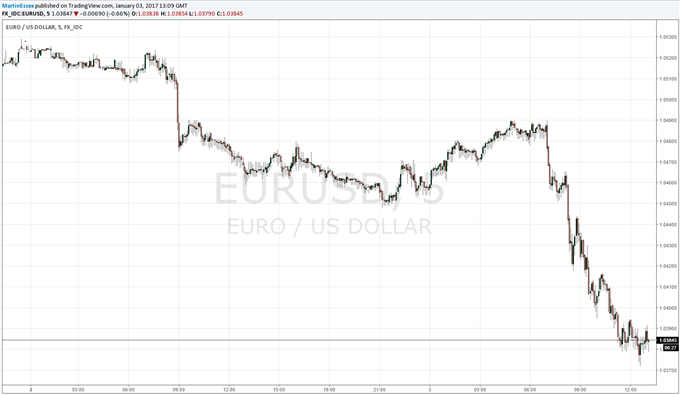 However, the data and the consequent rise in bond yields suggest that from an economic viewpoint EURUSD could rally, although German-US yield spreads and politics, rather than economics, continue to be the pair’s principal drivers. Planned elections this year in the Netherlands, France and Germany – and potentially in Italy and Greece too – have helped undermine the pair.

The head of Germany’s Ifo economic institute said Monday that Italians will want to quit the Euro-Zone if their standard of living does not improve. “The standard of living in Italy is at the same level as in 2000. If that does not change, the Italians will at some stage say: ‘We don’t want this Euro-Zone any more’,” Clemens Fuest told Germany’sTagesspiegel newspaper.