The Japanese Yen strengthened against the US Dollar on Thursday after the release of a moderately upbeat Summary of Opinions from the Bank of Japan, with USD/JPY sliding under 117.00.

Japan’s economy is on a “moderate recovery” path, helped by stronger exports and industrial production, according to the BoJ. The Summary is released days after a monetary policy meeting, in this case the December 19/20 conclave, and before the publication of official minutes. It also pointed to “resilience” in private consumption and said that growth was likely to remain “relatively high” thanks to Tokyo’s fiscal stimulus and recovery in Japan’s overseas markets.

USD/JPY slipped as far as 116.86 after the release, from 117.12 or so before it. This is a holiday-hit week, however, and all the usual caveats about barren trading desks and thin liquidity should apply.

Japan managed a third successive quarter of expansion in the third three-month period of 2016. However, question marks still glower over household spending which remained subdued, according to the latest official data which covered November. Inflation also remains stubbornly low. While headline consumer prices rose for a second straight month in November, the important “core” measure continues to fall as it has for much of this year.

In another effort to kickstart pricing power, the BoJ shifted its focus from “traditional” Quantitative Easing in September to a more novel policy aimed at targeting Japanese interest rates via the shape of the government bond yield curve.

It’s probably too early to say what fruit if any this is bearing but the Yen has weakened sharply against the US Dollar since the election of Donald Trump back in November. It is down more than 9% in December alone. From Tokyo’s point of view this has the doubly beneficial effect of making Japan’s export goods more attractive overseas and importing a bit of the inflation it would like to see. However, the latter “benefit” may prove double edged in an environment where Japanese households remain wary of increasing their spending. 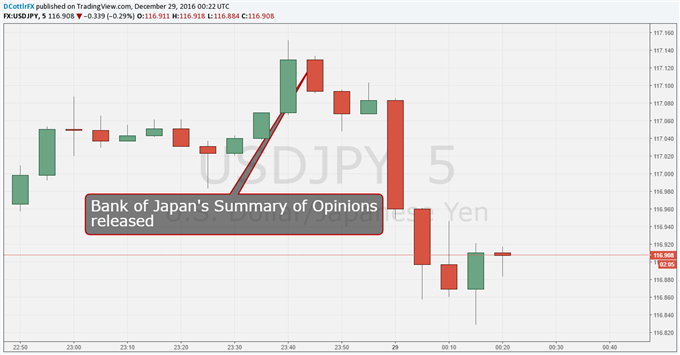