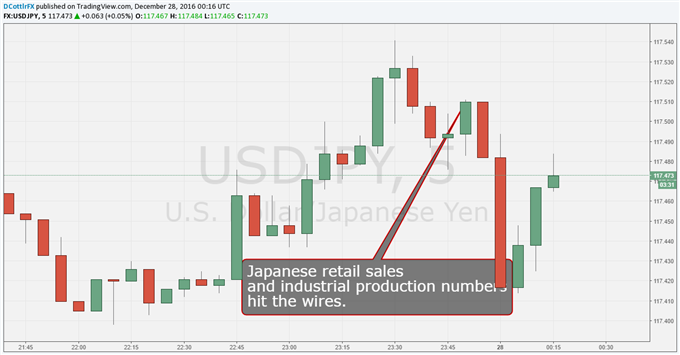 The Yen initially strengthened a little against the US Dollar early in Wednesday’s Asian session after some stronger Japanese data from both the industrial and retail sectors.

November’s industrial production rose 4.6% on-year according to official figures. This was actually a tick below market expectations but still a strong rebound from both the previous month’s 1.4% fall, and the gradual deceleration seen before that. Indeed, the figures may affirm that the production and inventory cycles have at last bottomed out and that the weaker Yen – down 9% through the month – is having a beneficial effect on industrial and manufacturing exports.

Over in the retail sector, trade was revealed to have expanded by 1.7% on-year in November, well above the 0.8% rise the markets were looking for. This data will be a welcome sign of consumer demand for the authorities in Tokyo which have for years been doing all they can to stoke just that. However the numbers contrast with those released on Tuesday which showed a sharp fall in household spending in the same month, so cheers will probably be muted.

On a different measure, large retailers’ sales fell 0.3% in November, which was better than expected but still hardly a barnstormer.

Still, the Yen got a bit of pep from the data package. USD/JPY slipped to 117.41 in the aftermath of the data, from 117.52 just before the release. However, the stronger-Dollar trend remains very much in play, and likely to remain so until we see what President Trump has planned for his first few months in office. He will be inaugurated on January 20. At the time of writing the greenback had already started to climb once again.

Down, then back again? USD/JPY