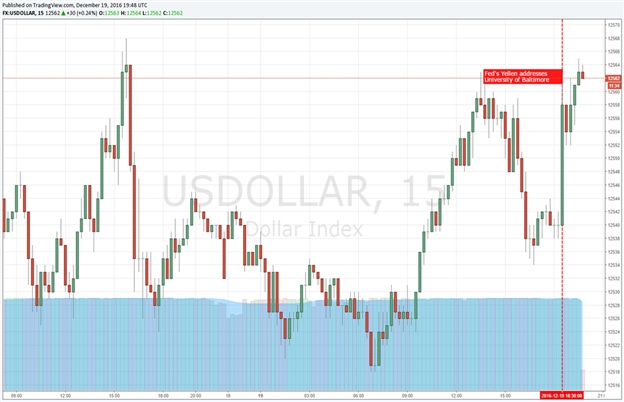 The US Dollar climbed as Fed Chair Janet Yellen addressed the University of Baltimore Commencement on the state of US employment. In her remarks, the policy head took an optimistic tone about the future of the US economy. While Yellen did not directly mention monetary policy in her speech, she assured those graduating that they would be entering the strongest job market in nearly a decade. With the unemployment rate at 4.6 percent, its lowest level since 2007, Fed policy makers have indicated a growing confidence in the US economy. Yellen also stated that she sees indications that wage growth is picking up, and that weekly earnings for younger workers have made promising gains.

The speech by the Fed Chair comes less than a week after the FOMC raised the benchmark lending rate by 25 basis points. That move had been projected fairly clearly by Fed policy makers and was widely expected by the market. However, the Fed did deliver a bit of drama when they increased their forecast for rate hikes in 2017 to three from two. The market has appeared to maintain a certain skepticism to this more hawkish forecast. Chair Yellen’s remarks Monday will help to solidify those views and perhaps curb the doubt that lingers in the market. Moving forward, it will be prudent to pay very close attention to Fed language to see if they begin to falter with their hawkish strides. Data will also play a key role in the convergence of market and Fed forecast with the Fed’s-favorite inflation measure, the PCE deflator, due for release Thursday.