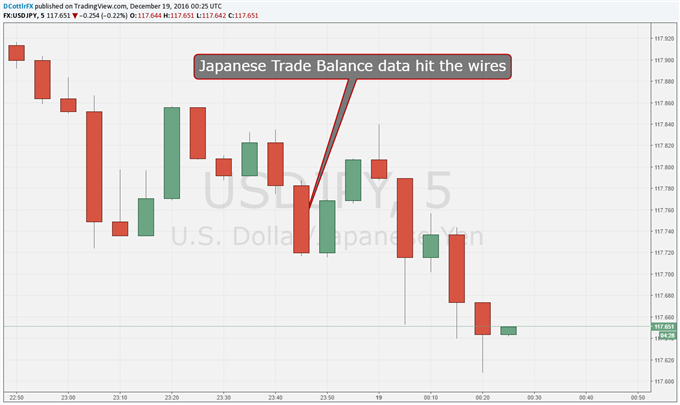 The Japanese Yen was steady against the US Dollar on Monday as Japan’s official trade balance figures came in lower than expected.

November’s merchandise balance stood at a surplus ¥152.5 billion ($1.3 billion), much below the expected ¥227.4billion and October’s ¥496 billion. This is a measure of so-called “visible trade,” in goods such as cars or electronics, rather than in services which are excluded. It shows the difference between Japan’s exports of goods and its imports.

Breaking down the data showed that imports fell 0.4% on-year, well below the 2.3% fall expected and October’s 10.3% slide. However, this was also a 14th straight monthly fall. Imports chalked up a 23rd, sliding 8.8%, although that was still better than the 12% decline which the markets expected.

Regionally, exports to China grew for the first time since February, while those to the US fell by 1.8%.

Overall this was a fairly mixed set of data, with goods imports suggesting that Japanese consumer demand remains week despite all the efforts made in Tokyo to stimulate it.

However, the lower-than-expected falls in both exports and imports may give some Japan watchers cause for hope. And in terms of volume, rather than value, exports were up 7.4% from a year-ago in a sign that external demand is picking up and responding to Yen weakness.

USD/JPY rose right after the numbers, rising to 117.81, from 117.72 beforehand. However, it soon relinquished those gains and was back to the 117.64 handle within minutes. The pair’s real focus is likely to be on Tuesday’s monetary policy meeting at the Bank of Japan.

The BoJ is not expected to make any changes, and opt instead to wait and see what higher US interest rates and the stronger US Dollar have on Japan’s economy.

Up, then back again: USD/JPY

Find out what DailyFX analysts are looking at right now, and learn some more about trading. Check out our webinars.