- Russia’s central bank decides to hold its benchmark interest rate steady at 10% but adds it may cut rates in the first half of next year.

- The Ruble, which has gained more than 5% since November 8, held steady versus the Dollar after the bank decision.

Russia’s Ruble is little changed against the US Dollar after Russia’s central bank met expectations and chose Friday to hold its benchmark interest rate steady at 10%. However, it added it may cut rates in the first half of next year. The bank said inflation risks have “subsided somewhat”. It added: “Consumer price growth is slowing down in part under the influence of temporary factors, while reduction in inflation expectations remains unstable.

Furthermore, the Central Bank of Russia noted in its policy statement, “Given this decision and considering that the moderately tight monetary policy is maintained, inflation will slow to the 4% target in late 2017. As the trend towards a sustainable decline in consumer price growth takes root, the Bank of Russia will consider an opportunity of cutting the key rate in the first half of 2017.”

The bank noted that the Ruble exchange rate dynamics continue to be conducive to inflation deceleration as oil prices have been higher than expected and Russian financial assets remain attractive to external investors.

Russia’s Ruble has been a surprise winner since Donald Trump's victory in the US presidential election. Trump's pro-Russia rhetoric helped it embark on a steep rise from the record low it hit in January. The Ruble has gained more than 5% since November 8, making it the best-performing currency against the US Dollar. Soaring oil prices have also helped. Russia is the world's second-largest oil producer, after Saudi Arabia.

The oil price slump pushed the Ruble to an all-time low in January – when USDRUB hit 85.9493 – when the price of Brent crude fell below $30 per barrel.

Prices are now back to over $50 per barrel and earlier this week USDRUB dropped to 60.4080, its lowest since October last year. But the Ruble’s strength won’t last should inflation slow and the bank cuts rates.

USDRUB was steady after the central bank decision and currently trades around 63.8. 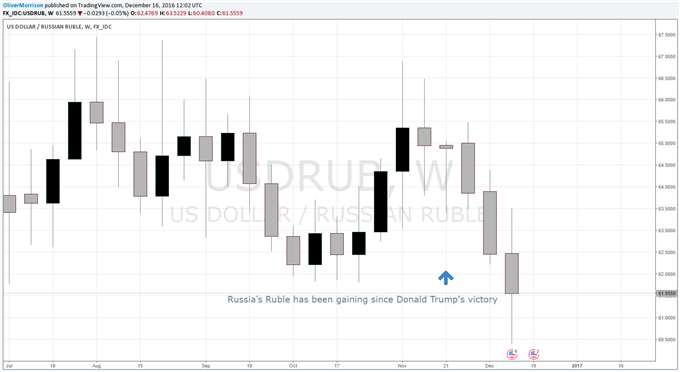