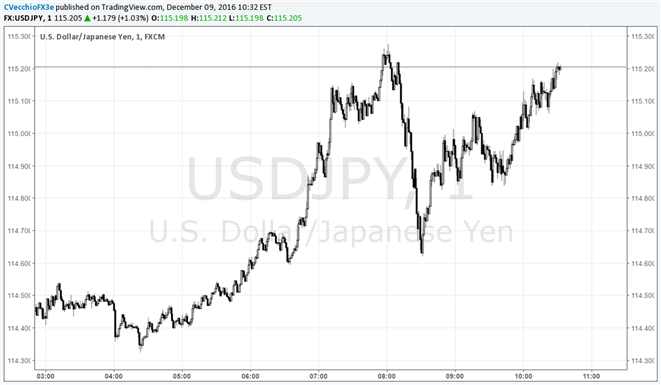 - US Dollar largely unchanged on the data, holds near daily highs.

University of Michigan Consumer Confidence for November came in at 98.0 versus 94.5 expected (93.8 previously), a significant jump that brought the index to its highest reading since January 2015.Last week, the Conference Board’s Consumer Confidence Index also spiked to 107.1 from 100.8, beating expectations of 101.5. Signs of a strong consumer, especially heading into the heavy-spending holiday season, are generally viewed as positive for Q4’16 US growth.

Stronger Consumer Confidence signals continued consumer strength in the US, which is vital to the health of the US economy as consumption accounts for approximately 70% of GDP. Next week will give further insight into the strength of the US consumer with Advanced Retail Sales and the Consumer Price Index. Stronger consumers propelling inflation, combined with new expectations of higher fiscal spending, should continue to put further pressure on the Federal Reserve to raise interest rates sooner and potentially faster.

The FOMC’s final policy meeting of the year takes place from December 13 to 14, and market expectations almost guarantee a rate hike, with Fed funds futures signaling a 97% implied probability for a hike and two rate hikes in 2017.