- USD/INR on pace to close lower for seventh consecutive session.

India’s Rupee has continued to gain slightly on the Dollar after the Reserve Bank of India unexpectedly kept the benchmark repo rate unchanged at 6.25%. Economists had forecast the central bank to cut its main rate by at least 0.25 percentage points after last month’s shock demonetization move by the government threatens to curb consumer spending and crimp GDP growth.

At the beginning of November the Indian government pulled 86% of the country’s currency out of circulation, banning all 500 and 1,000 Rupee notes in an attempt to combat corruption, black money and terrorism. That decision heaped pressure on the Indian Rupee, which like many emerging market currencies was already suffering from the prospect of next month’s Fed rate hike sucking money away from emerging markets.

But the Rupee had risen to a three-week high versus the Dollar Tuesday, to around 67.90, on expectations of a rate cut coupled with Dollar weakness: the Greenback, while generally still strong, fell against most major currencies yesterday as fears of the impact of the Italian referendum result receded, helping other emerging-market currencies such as the Rupee, to make some advances.

Yet the RBI surprised markets and decided to hold pat on rates Wednesday. Governor Urjit Patel said the bank will await more clarity on the impact of the cash ban decision,though it did warn that the move could cause inflation to slow by 10-15 basis points in October-December. It also cut its growth forecast for gross value added – a key input of GDP – to 7.1% from 7.6% for the 2017 financial year. In October, the bank cut its benchmark repo rate to 6.25% from 6.50% – the lowest level for nearly six years – in an effort to boost the economy. 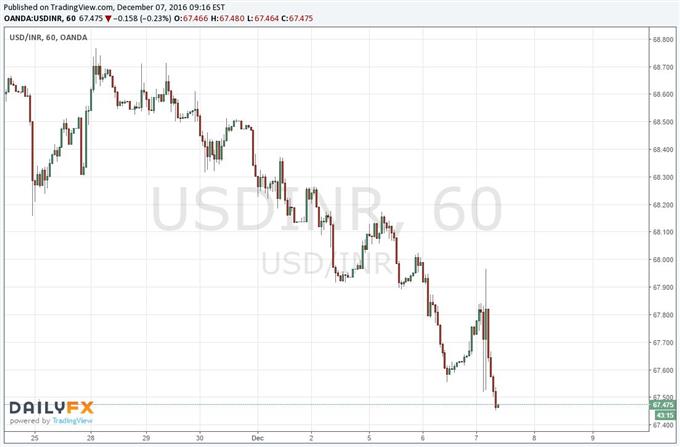 In response to Wednesday’s decision, the Rupee continued to make smaller advances on the Dollar. Today the USDINR dropped to a low of 67.464 and was last seen at 67.475. This would mark the seventh session in a row in which the Rupee has closed stronger against the Dollar.