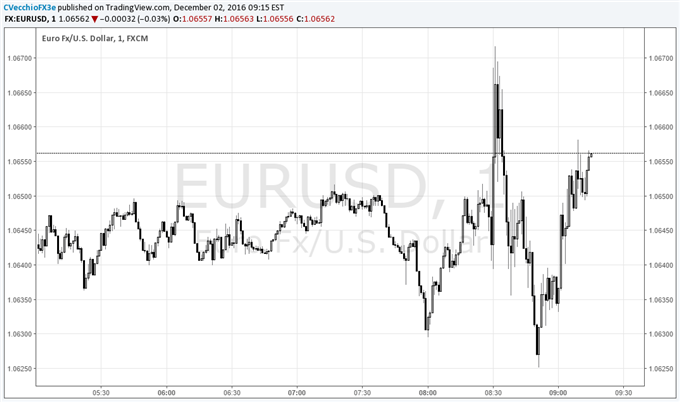 - Job growth came in just below expectations, still strong enough to not disrupt the overarching trend.

Jobs growth in the United States in November remained solid at +178K, albeit slightly below expectations of +180K, as the economy appears ready for the Federal Reserve to tighten policy further. Although the October reading was revised lower by -19K to +142K, the September headline was boosted by +17K to +208K overall, leaving the two-month net revision at a mere -2K.

While off the +216K level of private payrolls that ADP saw on Wednesday, today’s reading of +178K is as middle of the road as they come. It’s important to keep in mind that, while markets psychologically hold +200K as the threshold, Fed officials like Janet Yellen and John Williams have spoken out saying +100K is enough to sustain the current unemployment rate.

Continued strong jobs growth creates more pressure on the Fed to make its move to higher rates. However, depressed wage gains and weakening participation can give the Fed pause, As far as rate hikes are concerned, this report is a very mixed bag. However, strong economic data combined with the expectations for highly accommodative and expansionary fiscal policy can lead the Fed to raise rates sooner and faster to head off expected inflation. Fed funds futures continued to price in rate hikes in December 2016, June 2017, and December 2017 after today’s data, just as they did pre-release.

Immediately following the data, the US Dollar dropped against most major pairs as the internals of the report. EUR/USD traded in a choppy 50-pip range, settling at 1.0656 at the time this report was written.

Read more: Preview for November US NFPs and Outlook for US Dollar, FOMC