- Forward guidance from the ECB suggest a low policy rate over the medium term.

- EUR/USD was largely unchanged, falling slightly on the news and then reversing losses.

The European Central Bank chose to keep interest rates unchanged today, with their Deposit Facility Rate remaining at -0.40% and the Main Refinancing rate at 0.00%, as expected. They also kept their Quantitative Easing program with the same target of €80 billion, despite some expectations of an expansion or alteration to the program.

During the September meeting last month, the ECB displayed an increasingly dovish stance through text and rhetoric as they said that they are very willing to increase the timeline of QE beyond March 2017, until the inflation path is consitent with the ECB’s goals. Today’s statement mentioned this, as well as that rates are expected to stay at this level or lower for an extended period of time, and certainly beyond the timeline for QE.

During the press conference following today’s meeting, President Mario Draghi had of ammunition for markets. He started by mentioning that the outlook has risks tilted to the downside and that the ECB was ready to act using all instruments within its mandate. That was closely followed by an assessment of the economy.

As Q&A began, the Euro really began to move. Following the somewhat dovish tone struck in the statement and press conference, President Draghi mentioned that the ECB had not discussed the extension of QE beyond March, that the current stance of monetary policy was already extraordinary. This slightly hawkish tone was reversed quickly as he then said that QE was unlikely to come to an abrupt end. He also commented on interest rates, saying that low rates have helped but the ECB has not discussed cutting them further. He addressed the news reports suggesting a scarcity of bands thsat the ECB could purchase, saying that this was not an issue and that corporate bond issuance had even risen. 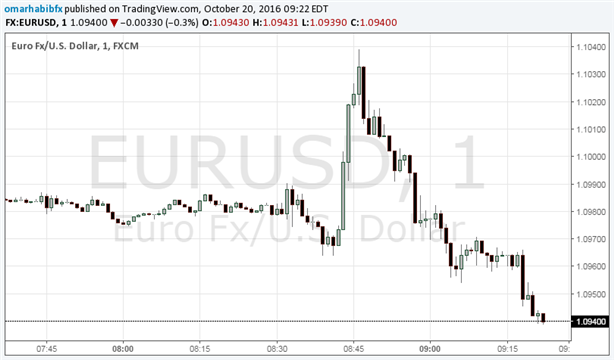 EUR/USD traded within a very limited channel on the statement but broke out during the press conference, rising from $1.0964 to $1.1039. It then reversed, dropping to session lows of $1.0939.