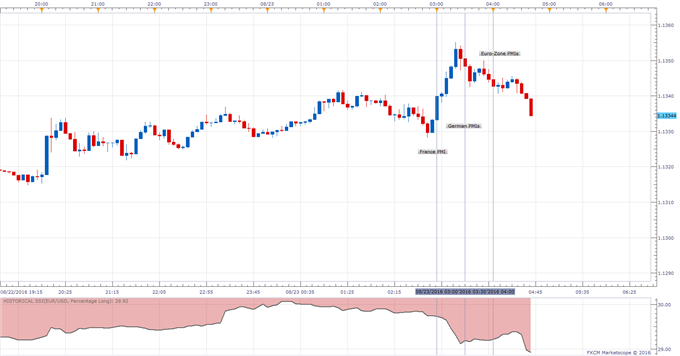 - Flash Eurozone Manufacturing PMI at 51.8 vs 52.0 prior and expected

Learn about the proper tenets of risk management with the “Traits of Successful Traders” series.

The Euro was little changed versus other major currencies (at the time this report was written) after today’s Flash Markit Eurozone PMIs printed mixed readings.

Manufacturing PMI declined to 51.8, below the prior and expected 52.0 figure.

The Euro-Zone numbers came after earlier today the German Markit PMI figures showed some easing, while the France figures mirrored the region-wide report with a miss in manufacturing but a beat in services and the composite index.

According to Markit, France is on course for its best quarter of growth so far this year, but continues to trail behind Germany in terms of the overall pace of expansion.

A reading of less than 50 indicates a contraction of activity, above 50 points to an expansion, and an index of50 says that no change has occurred.

Markit said that the Euro-Zone remains on a steady growth path in the third quarter, with no signs of the recovery being derailed by ‘Brexit’ uncertainty.

Interestingly, Markit said that the resilience of the PMIs in August will add to the belief that the ECB will see no need for any immediate further stimulus, but some disappointing trends might push the central banks to keep the door open for more stimulus later in the year.

With the report showing a mixed bag of readings, while also adding commentary which might be generally in line with the market’s view, the Euro may remain “driver-less” for the time being.

Meanwhile, the DailyFX Speculative Sentiment Index (SSI) is showing that about 28.9% of traders are long the EUR/USD at the time of writing. This is an extreme SSI reading, as retail traders are apparently trying to fade the move higher.