- The British Pound traded higher versus all other majors, short term outlook here

- PPI and RPI data all beat expectations, perhaps due to past depreciation of the Sterling

The British Pound spiked higher versus all other major currencies after the UK’s Consumer Price Index (CPI) and other price measures printed figures above expectations.

Headline CPI showed an annual rise of 0.6% percent, above the expected and prior reading of 0.5%. The month-on-month figure came in line with expectations by printing -0.1% with a 0.2% prior print.

Core CPI, which excludes volatile factors such as food, energy, alcohol, and tobacco, was the only inflation figure below expectations at 1.3% versus the expected and prior 1.4% print.

Other measures of inflation such as the RPI and PPI all printed better than anticipated numbers.

The data represent the period immediately after the Brexit vote so it could give indications for the initial inflationary environment post-Brexit.

Looking into the report, the Office for National Statistics said that the main contributors to the increase in the rate were rising prices for motor fuels, alcoholic beverages and accommodation services, and a smaller fall in food prices than a year ago, which explains the discrepancy between the headline and core figures.

Other signs of price pressures (such as the better than expected RPI and PPI figures) might be partially explained by the huge depreciation of the British Pound (leading to a significant jump to import costs).

Input costs based on the Producer Price Index Input NSA year-on-year figure rose by 4.3% versus an expected 2.0% rise.

CPI readings are a key measure for the BOE in deciding appropriate monetary policy. In “normal” trading conditions, higher CPI readings could have been interpreted as contributing to a more hawkish BOE outlook, while a miss to expectations could be seen as leaning to the dovish side; this could perhaps explain the jump by the British Pound based on a knee-jerk reflex reaction.

With that said, the BOE announced significant easing measures two weeks ago, and explicitly said that they will look past the anticipated higher inflation post-Brexit as the bank focuses on reducing spare capacity at the cost of higher inflation.

Against this backdrop, the jump by the British Pound appears curious.

Looking at 2-year UK yields at the time of the release, yields saw a jump higher as well, perhaps implying that the market isn’t buying the BOE line saying that will look past higher inflation, or that the acceleration in inflation might suggest that the bank will be limited in its scope to cut rates further or provide further stimulus.

With that said, the central bank did explicitly say that they will look through the higher prints so follow-through on Sterling strength might be limited at the time based on the inflation read alone.

Meanwhile, the DailyFX Speculative Sentiment Index (SSI) is showing that about 69.8% of traders are long the GBP/USD at the time of writing, on the wrong side of the long term move lower, apparently trying to pick the bottom. The SSI is mainly used as a contrarian indicator implying a short bias. 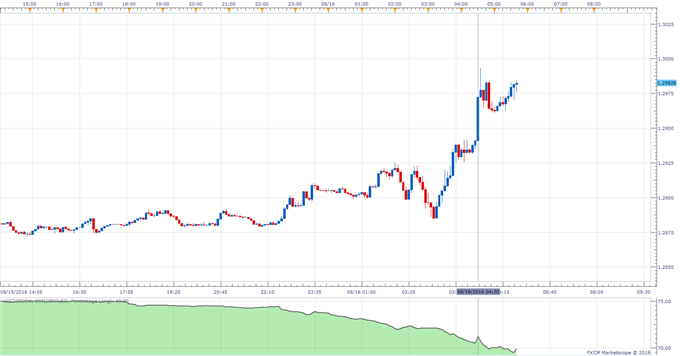