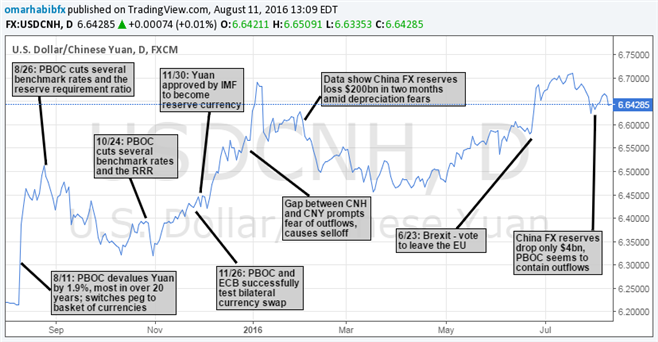 Looking Back On PBOC; One Year Anniversary Of August 11 Devaluation

On August 11, 2015 the PBOC devalued the Yuan by 1.9%, marking the largest fall for the Yuan since 1994. The same day, the Yuan was switched from being solelypegged to the US Dollar to now being referenced to a basket of currencies. Since then, there have been numerous factors affecting the Yuan, mainly monetary policy and international developments.

Only two weeks after the decision to weaken the Yuan, the PBOC cut both the RMB Benchmark Loan as well as the Deposit Interest Rates by 25 basis points, and reduced the Reserve Requirement Ratio by 50 basis points. The Loan Interest Rate was cut to 4.6% and the Deposi Rate to 1.75%. This was done again, in the same magnitude, on October 24, 2015.

On November 30, China hit the milestone of having the Yuan approved by the International Monetary Fund (IMF) to join its basket of reserve currencies and to be included in the groups basket of currencies known as Special Drawing Rights. This has been a goal for China as it represents the standard of being “freely usable,” allowing the Yuan to join the dollar, euro, pound and yen in October 2016.

In late 2015, there had been a growing gap between the off-shore and the on-shore Yuan rates which caused fears of capital outflows, causing a panic sell-off that drove down the value of the Yuan. This mounted into fears that China was slowly going to deplete its foreign reserve holdings in its fight to control the value of the local currency.

The latest major move in the Yuan happened during Brexit, which impacted almost all currency pairs, especially those linked to European countries like the Japanese Yen and the US Dollar. The flight to safety into the yen and dollar, and out of the euro and pound drove FX volatility following Brexit.