- The British Pound plunged versus other major currencies post-BOE.

- BOE cut rate to 0.25% by a unanimous decision - scope for further cuts too.

The British Pound plunged versus other major currencies after today’s Bank of England (BOE) rate decision saw the bank rate cut to record lows at 0.25%, as was expected by economists.

The Monetary Policy Committee (MPC) voted unanimously to cut the main rate to 0.25%.

The MPC voted by a split decision to boost the Asset Purchase Facility (the BOE’s QE programme) for a total of £435b from the prior £375b.

The bank also announced the purchase of up to £10 billion of UK corporate bonds in the next 18 months, and new "Term Funding Scheme" to reinforce the pass-through of the cut in the bank rate.

The BOE said that those measures will be financed by issuance of the central bank reserves.

The MPC emphasized they can do more if needed, including further cuts to the key rate.

With the rate cut decision highly expected (the market basically priced in a 100% probability of a cut), attention quickly turned to the other elements in the statement and the Quarterly inflation report.

Contrary to the anticipated rate cut, expectations were only slightly tilted for a hold on a boost to the Asset Purchase Facility. As we mentioned today, this was likely to catch some participants on the wrong side, as it seems the QE addition was perhaps more than the market anticipated.

The other major element of the announcement was the revisions to inflation and growth outlook. The inflation report revealed that the central bank cut its growth forecast for 2017 to 0.8% from the prior 2.3%, while 2018 growth is now seen at 1.8% from 2.3%, on the backdrop of estimated weaker investment and consumption due to Brexit.

The BOE forecast only 0.1% expansion this quarter and left the 2016 number unchanged at 2.0%. This indicates that the central bank do not see a recession on the horizon due to their new measures.

Inflation is forecasted to reach the bank’s 2% target in Q4’17 versus Q2'18 prior, as the weaker Sterling on the Brexit vote adds to inflationary pressures.

Meanwhile, the DailyFX Speculative Sentiment Index (SSI) is showing that about 58.3% of traders are long the GBP/USD at the time of writing as traders flipped net long on the drop, apparently trying to pick a bottom. The SSI is mainly used as a contrarian indicator implying further weakness ahead. 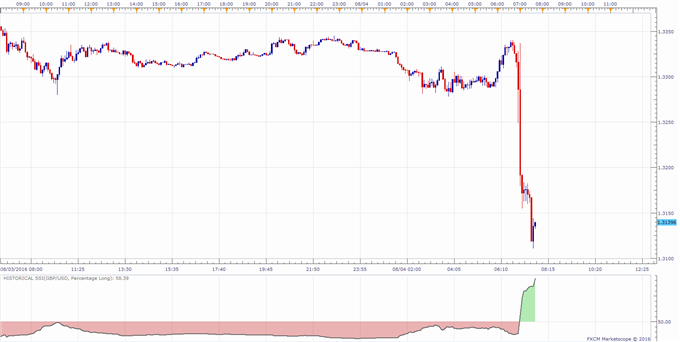