The GBP/USD is trading sideways in the last couple of trading days between 1.3350 and 1.3300 after the pair surged higher following Friday’s US 2Q GDP miss.

The pair seems to have problems cracking the 1.3350 resistance, but things could change quickly with the event risk ahead.

All eyes are on the Bank of England in today’s session with the market eager to know how the central bank reacts to the unfolding Brexit situation.

The Bank of England August Rate Decision takes center stage in the hours ahead. The central bank is expected to cut the bank rate to record low 0.25% from the prior 0.50% in an effort to stimulate the economy on fears of a downturn in activity following the Brexit vote. The bank's Asset Purchase Target is expected to remain unchanged at 375b.

The market is pricing a 100% chance of a rate cut in today’s meeting (according to swaps pricing). If the central bank does indeed cut rates by 25bps, with the market fully anticipating this result, focus might quickly turn to other potential market moving factors (and there are many here).

Contrary to the anticipated rate cut, expectations are only slightly tilted for a hold on a boost to the Asset Purchase Facility (the BoE’s QE programme). This seems likely to catch some participants on the wrong side, with more QE (usually) implying weakness for the currency.

Other measures could include an extension of the Funding for Lending Scheme (FLS), but this might have less market moving impact in the short term.

The vote count will also be in focus today as the market tries to gauge to unity within the central bank for today’s decisions.

If that wasn’t enough things to focus on, the BoE will also release its Quarterly Inflation Report.

The bank appears likely to lower growth forecasts and lift their inflation projections. The central bank could pin higher inflation forecasts on the significant drop in the Sterling, while emphasizing Brexit uncertainty as the main reason for the lower growth prospects.

The most interesting development here could be if the bank signals that the UK is not likely to enter a recession. This could potentially be a huge market mover. If the outlook for the UK’s economy as perceived by the bank is not as bad as initially feared this could imply some Sterling strength. This could also pose problems for the BoE after having warned of a recession pre-Brexit.

On this backdrop, the growth outlook (at this stage) seems to be more important than the inflation projections, as we had some MPC members saying they are willing to look through higher inflation in the short term in order to help ease growth concerns. 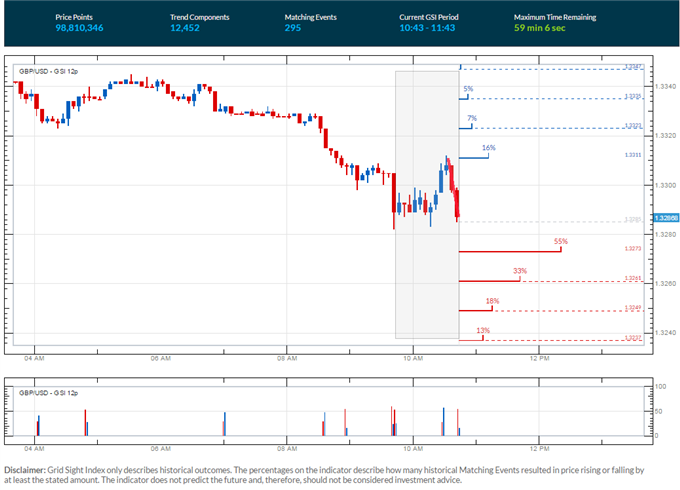 The GBP/USD is trading around the 1.33 level at the time of writing, with GSI calculating significantly higher percentage of past movement to the downside in the short term. The GSI indicator above calculates the distribution of past event outcomes given certain momentum patterns, and can give you a look at the market in a way that's never been possible before, analyzing millions of historical prices in real time. By matching events in the past, GSI describes how often the price moved in a certain direction.

We use volatility measures as a way to better fit our strategy to market conditions. The British Pound is expected to be the most volatile currency versus the US Dollar on a 1-Week implied volatility basis. This is understandable given the aforementioned event risk, which could potentially see the pair starting to really gain momentum. In turn, this could imply that breakout type trades might be preferable in the short term. 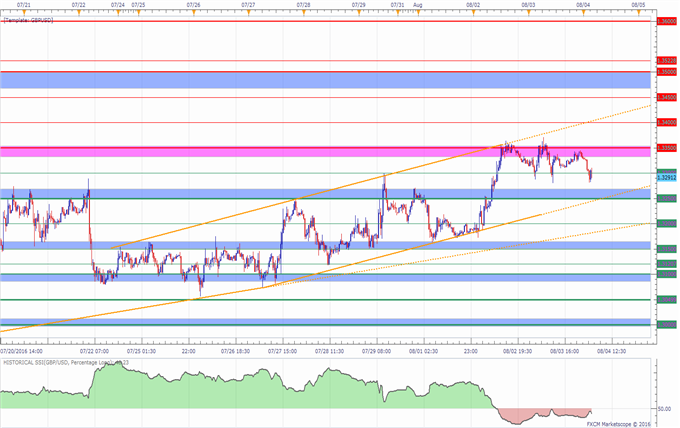 The GBP/USD is currently trading below the 1.33 handle. The technical areas appear quite clean to either side with areas of resistance and support around the 00s and 50s (see chart above for specifics).

Meanwhile, the DailyFX Speculative Sentiment Index (SSI) is showing that about 46.2% of traders are long the GBP/USD at the time of writing. The SSI is mainly used as a contrarian indicator implying a slight long bias.