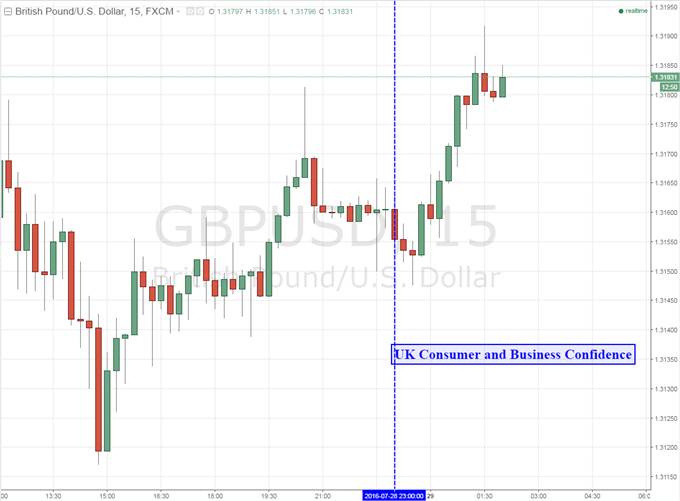 The British Pound offered a tepid reaction against its major peers after two UK July sentiment surveys crossed the wires. The GFK sentiment index, measuring consumer confidence, recorded -12 for the current month from -1 in June. This marks the sharpest drop since at least 1981 as well as showing the lowest overall reading since December 2013.

The Brexit referendum has taken its toll on consumer sentiment. According to the report, the economic outlook for the next 12 months fell to -33 from -14 in June. In addition, the 12-month outlook for personal finance declined to -1 from 8 in June. Savings intentions also eroded with the reading slipping to 1 from 5. Lastly, survey expectations for major purchases dove to -2 from 9 previously.

A simultaneous release, the Lloyds bank business barometer summary climbed to 29 in July from 6 in June. This was the sharpest rebound since January 2012 and returned the measure to levels seen before the UK referendum vote. Businesses grew very concerned about the impact the Brexit could have on activity which led to a slump in confidence before the June 23rd vote. In addition, expectations for business activity over the next 12 months increased to 41 from 23. Current economic optimism also improved to 17 from -11.

Looking ahead, the Bank of England rate decision will be next week. The markets are expecting the central bank to reduce its main lending rate to 0.25 percent from the already record low 0.50 percent. Some market participants further suspect a revival of the stimulus program that has sat long dormant. Most BoE officials said that they expect policy loosening in August from the July monetary policy announcement.

The DailyFX Speculative Sentiment Index (SSI) is showing a reading of 1.6 following the announcement, meaning that for every short GBP/USD position, there are 1.6 on the long side. The SSI is a contrarian indicator at extreme levels, implying further GBP/USD weakness ahead.