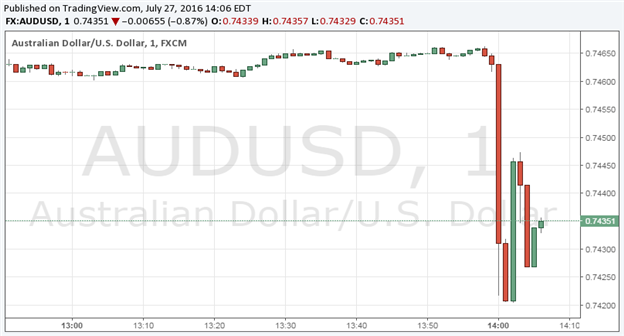 - The Federal Reserve said the labor market has strengthened and that growth conditions have improved.

- Near term risks that were in the June meeting, such as weak job reports in April and May, have diminished.

The Federal Reserve released its July policy statement following its two day meeting, with a slightly more optimistic view. The changes in the policy statement noted an improving labor market accompanied by more sustained growth. The U.S. dollar strengthened immediately on the policy statement, with USD/CAD spiking higher, while EUR/USD and AUD/USD dropped to session lows.

In June, the statement said “pace of improvement in the labor market has slowed while growth in economic activity appears to have picked up,” while in July, the FOMC noted the “labor market strengthened and that economic activity has been expanding at a moderate rate.” Also in June, the statement said “job gains have diminished,” while in July, the central bank saw “payrolls and other labor market indicators point to some increase in labor utlization in recent months.”

The Statement also mentioned that “near-term risks to the economic outlook have diminished.” While this may be referring to an improved pace of job growth following bad reports in April and May, it could also be a reference to Brexit.

While in June, Chair Yellen was able to muster another unanimous vote, today’s meeting included a dissent again, just as in March and April. Kansas City FedPresident Esther George dissented, as she thought it would be better to raise the Federal Funds rate target to 50-75 bps.

Treasury yields rose and spiked higher initially but then fell across the board, with the 10-year falling by more percentage points than the 2-year, indicating more yield curve flattening. At the time this report was written, the 10-year Treasury was down .0498 percentage points and the 2-year was down .0276 percentage points. Fed funds futures immediately spiked to show a 51% chance of a rate hike by December but eventually settled near the recent threashold highlighting a 38% chance for higher borrowing-costs in December.

AUD/USD traded volatilely around the initial announcement, falling from 0.74650 to 0.74206 in the initial moments of the release. The AUD/USD was trading at 0.74351. USD/CAD, NZD/USD and EUR/USD also experienced substantial volatility in the immediate wake of the statement release.