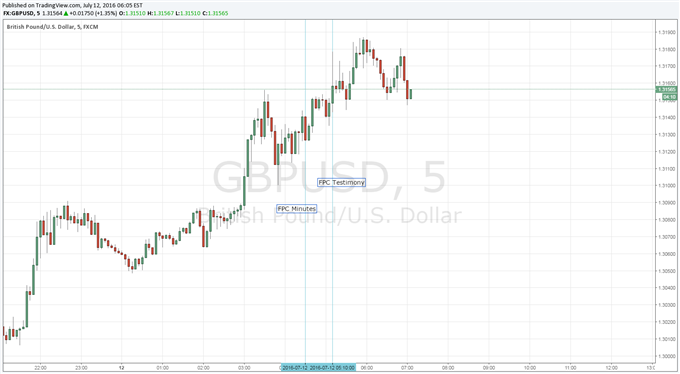 - The FPC reduced the countercyclical capital buffer from 0.5% to 0% of banks’ UK exposures by a unanimous decision

Looking into the FPC minutes, the committee said that risks to financial stability from the referendum had begun to crystallise. The FPC recognised that there would be a period of uncertainty and adjustment following the result of the referendum, and have highlighted the following risks for close monitoring:

The Committee cut the countercyclical buffer rate from 0.5% to 0% by a unanimous decision in order to reduce pressure on banks to tighten credit conditions.

In the following testimony to the Treasury Select Committee, Carney and the FPC members discussed the report. Traders might have been waiting for possible hints “slipping” on future monetary policy; an expectation that quickly evaporated.

The few comments about monetary policy measures seemed to have added little information to what was already revealed by Carney in the past.

Carney did say the MPC has the tools needed to fulfil their responsibilities, and that there always could be a monetary response.

The BoE Governor reflected that in his view the record low bond yields do not represent 30 years of stagnation, rather a hedge on downside risks.

The British Pound level is seen as reflecting investor perception of risks and "is helping" in these circumstances. The decline can help UK economic adjustments and improve current the account deficit.

On possible contagion issues from the Brexit vote to the Euro-Zone, Carney said that there might be a potential slowdown in the Euro-Zone's economy which could signal a tighter risk environment and a challenge to economic conditions. The Governor said that UK banks direct exposure to Italian banks is less the 1%, while direct exposure to the Italian economy is quite modest.