Blowout December US Jobs Report Inspires US Dollar Rally, If Only Briefly

The December US labor market report was solid all around, posting the third consecutive month of jobs growth >+250K (three-month average is +264K), helping ease concerns over recent (which was revised slightly higher to +119K). Notably, the December NFPs figure produced the second best recorded jobs growth in all of 2015, even as the participation rate ticked up: more citizens are entering the workforce, and there is a sufficient supply of jobs to match it.

Accordingly, as articulated in this morning’s NFP preview, it seemed that only a blowout NFP report, in context of recent Fed commentary, would lead to a significant rebound in the USDOLLAR Index. While the USDOLLAR Index initially reacted positively to the data, the seemingly strong report rang hollow. Market participants, conditioned to the fact that December usually prints a strong number, need more than just the typical outlier to convince them that the Fed will actually follow through on its intention to raise rates four times this year. It appears that without a further firming of future rate expectations (markets pricing year-end Fed benchmark rate at 1.00% now), the expectation of a gradual liftoff cycle remains.

Here are the data that’s whipping the US Dollar back and forth this morning:

Why might the market be fading the initial US Dollar strength?As noted earlier, market participants are keenly aware that December is usually a strong print. In fact, over the past five years, the average monthly jobs gain was +208.3K. From 2011 to 2015, in months not November or December, the average jobs gain was +199.8K. During this same time frame, in November and December, the average jobs gain was +255.1K. This is strong evidence that there has been a yearend seasonal distortion in the data, with no clear indication from today’s report that this labor market strength with continue at its current, torrid pace into 2016. 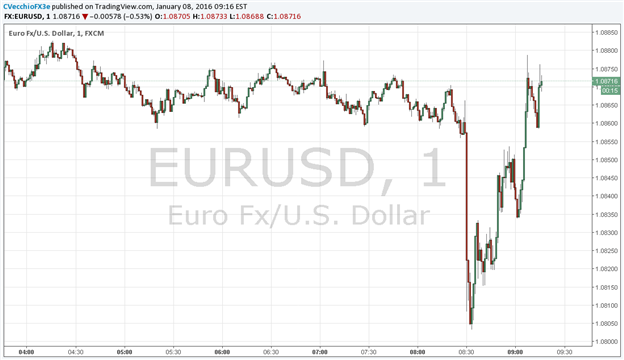 While EUR/USD initially sank from $1.0855 to as low as $1.0804, EUR/USD quickly returned back to its pre-NFP level, and was trading above it at $1.0872 at the time this report was written. Similar price action was observed across the USD-complex, with USD/JPY posting a notable reversal as well.

Read more: Preview for December US NFPs and Implications for USDOLLAR