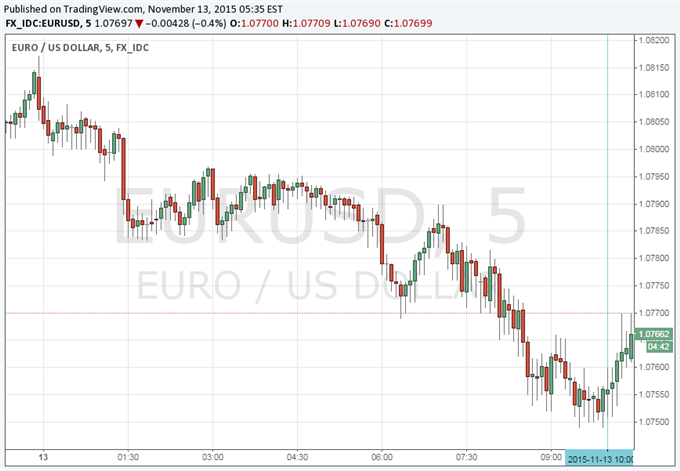 The Euro was little changed versus the US Dollar (at the time this report was written) after today’s Euro-Zone’s GDP figures missed estimates. According to preliminary estimates by Eurostat, Euro-Zone’s Gross Domestic Product (GDP) grew a seasonally adjusted 0.3% in the third quarter of 2015, below the 0.4% expected by economists, and down from 0.4% in the previous period. The year-on-year change in GDP was 1.6%, below the expected 1.7%, but above the prior 1.5%.

Greece preliminary GDP weighed on the data as estimates signaled 3Q growth came in at negative -0.5% compared with the previous quarter, versus the -1.0% expected, while the year-on year estimate printed a negative -0.1%, below the +1.3% revised down prior reading, but not as bad as the -0.3% expected.

Speaking at the European Parliament yesterday, ECB president Mario Draghi said the outlook for core inflation “somewhat weakened,” and stated that downside risks from a global slowdown are “clearly visible”, thus adding to speculation that the ECB will expand QE in December. DailyFX Currency Strategist Ilya Spivak noted earlier today that even a positive GDP outcome might not have a significant impact on the Euro, as it might not effect near-term monetary policy bets. With Draghi rhetoric still in the background, and on a mixed report, the Euro was little changed versus the US Dollar.