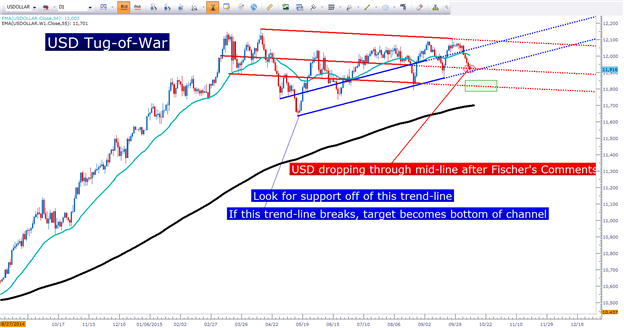 1. China announced fresh stimulus over the weekend, and this fired hopes for additional stimulus measures down-the-road. The announcement over the weekend was a plan to expand a pilot program to boost banks’ lending abilities. The pilot program is currently running in Shandong and Guangdong, and it allows banks to pledge a variety of assets in order to borrow from the Central Bank; and these can be a wide range of assets including other bank loans. So this means that a bank could take receivables on the balance sheet, and pledge those as collateral to get more funding from the Central Bank. In the weekend announcement, this program is going to be expanded to nine provinces including Shanghai and Beijing, and this is, in a way, a form of Chinese QE. Banks will be able to pledge illiquid assets with the Central Bank and then borrow and invest funds on these illiquid investments.

But more than this announcement, it’s the signal from Beijing that provided promise to markets, as this overture is thought to be a sign of more stimulus to come down-the-road. Chinese stocks largely cheered this announcement, with the Shanghai Composite popping higher by +3.28% and the Shenzhen Composite traded higher by +4.18%. Other bourses throughout Asia enjoyed the ride as well, with the Nikkei moving higher by +1.64% and Hong Kong’s Hang Seng Index was up +1.21%.

But the big question is whether or not this will work. As in, we’ve seen stock markets around-the-world tear higher after the Federal Reserve backed off of a September (and now a 2015) rate hike, but we still haven’t seen any data suggesting that the slowdown has yet been quelled. Commodity prices are ripping higher on this expectation of additional easing out of Beijing, and we’re seeing many of those ‘risk-off’ trends continuing to reverse. Aussie (AUD), Kiwi (NZD) and Cad have been putting in particularly strong price action, as commodity prices (and commodity currencies) are seeing a massive reversal over the past two weeks.

But we still don’t know how slow the slowdown in China is really hitting, nor do we know that the Federal Reserve will, in fact, back off of a 2015 rate hike. The type of movements that we’ve seen over the past two weeks, with risky assets ripping higher as it’s become more apparent that the Fed is softening their stance based on global economic pressures, is just the type of ‘excessive risk taking’ that the Fed wants to offset by slightly tightening policy.

In a speech over the weekend, Fed Vice Chair Stanley Fischer talked on both sides of the decision by stating the Fed was still on track to hike in 2015, but that ‘considerable uncertainties’ surround the economic outlook and that rate liftoff was an expectation, not a commitment. This fired US Dollar weakness as we saw even more 2015 rate hike bets get priced out of the market, and this finally gave us a break of the mid-line in the bull flag formation that’s been working in the US Dollar since April of this year.

2. Earnings season: The most significant driver of stock prices are earnings, even in this QE-fueled, stimulus-led stock-buying bonanza of the past six years. As these stimulus announcements have been rolled out, the more prescient question for stock investors is how this more ‘accommodating’ environment will help a company’s earnings. And for the past six years, we’ve generally seen earnings of stocks in the United States steadily moving higher as the recovery continues to take hold.

And now that we’re at the point where the Federal Reserve wants to finally remove the support that’s held markets together for the past six years, these earnings announcements have become more important than at any other time in the past six years as investors judge whether these companies can continue growing in a tighter monetary environment. And perhaps more important, these earnings reports can give us a sign for how much Asia has actually slowed down, as many American companies have significant exposure to the East.

This week, we get deeper into earnings season: Today after the US equity close we hear from JPMorgan Chase, with Bank of American and Wells Fargo reporting on Wednesday followed by Citigroup and Goldman Sachs on Thursday. Growth estimates are for approximately +3%, down from approximately 6% only two weeks ago.

Any big outsized miss on any of these earnings announcements could trigger a large-scale sell-off. Last week’s announcement from Deutsche Bank that they were taking a $7B write-down took the market by surprise; and if we get similar announcements from other banks this week – that could spark some interesting events as evidence of economic slowdown becomes more apparent.

The open of the week finds the S&P 500 in familiar territory. On Friday – we ran up to a previous level of resistance and since then, have not been able to break. The price of 2,021 is a big resistance level on the S&P 500; as this is the 61.8% Fibonacci retracement of the most recent ‘major move,’ taking the high of 2,137 set earlier in the year with the ‘panic lows’ that came into the market after China’s Black Monday.

This is also the exact level that the S&P had ripped up to after September’s FOMC statement. In September, the Fed elected not to hike rates and this created considerable demand in risk-assets like the S&P 500. Prices ripped all the way up to this 2,021 level and as Ms. Yellen began the press conference with significantly-hawkish language, alluding to the Fed’s 2015 rate hike plans, risk assets began selling off.

The daily chart highlights a doji candlestick that came in on Friday after an exuberant run after the Thursday release of FOMC minutes; and this could be a fantastic reversal setup for those looking to short stocks going into a heavy week of news. 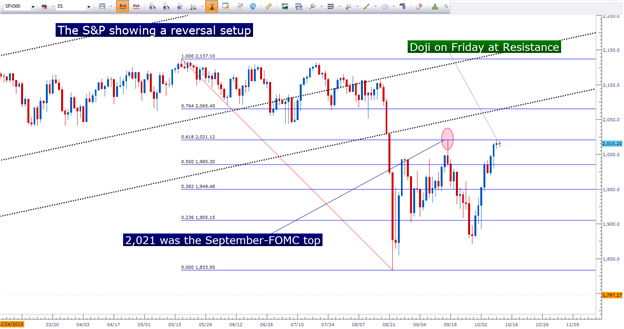 3. Chinese Data could set the tone: Outside of earnings or stimulus announcements, Chinese Data will likely serve as a primary driver across global markets.

China delivers export numbers tonight (Tuesday morning in China) and CPI and PPI tomorrow night (Wednesday morning in China), and each of these can be market-moving as it could signify how deeply that slowdown has set within the Chinese economy. Should either of these prints disappoint, that could spark a quick run of risk-aversion as it becomes clearer that the slowdown in China is more threatening to the global economy than originally thought/feared.

Look for Germany to be particularly susceptible to Chinese weakness, as German data has been largely disappointing of late and as the slowdown in China deepens, it will likely impact a robust (albeit contracting) German economy more so than other areas in Europe. The DAX (GER30) put in a strong bounce off of a long-term support-line last week; but the fact that we’re seeing ‘lower-highs’ indicate that this bounce may be short-lived. 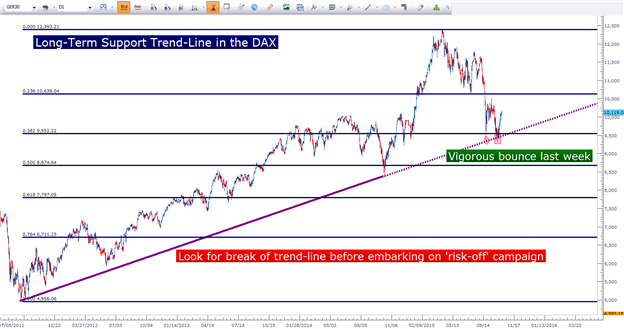