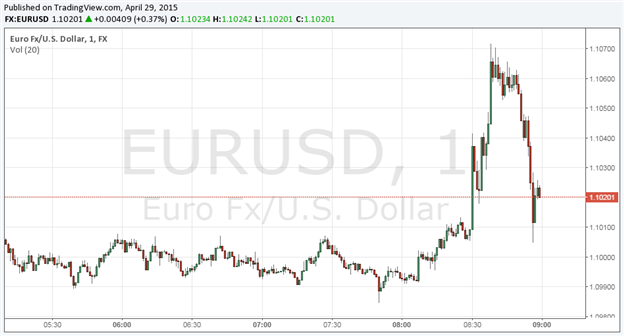 - Growth stunted by decline in consumption, exports, and business investment.

After weeks of disappointing retail sales, manufacturing, and inflation data, there was little doubt that the Q1’15 US GDP figure was going to be a letdown relative to expectations for above-trend growth coming into 2015. The magnitude of that disappoint was officially measured today, with the release of the first quarter growth report, showing that the economy only grew by a meager +0.2% annualized rate. Pundits have long-held the belief that there were transitory factors in play, and a first look at the internals of the report offers some support to that belief.

These data shed some light on the biggest concerns about the data in the first quarter: the labor strikes and port shutdowns on the West Coast, impacting trade; the strong US Dollar diminishing global demand for US goods; and inclement weather in the Midwest and Northeast impacting construction. While it’s difficult to quantify these factors specifically at present time, the internals of today’s GDP report suggest there may be some veracity to market watchers saying weakness in Q1’15 was transitory.

Here are the data that’s sent the US Dollar to fresh weekly and monthly lows today:

Around the data releases, EURUSD initially spiked higher to its highest exchange rates since the beginning of March (taking out the post-March FOMC swing highs in the process). EURUSD traded from $1.1010 to as high as $1.1071, before quickly fading the move to $1.1020 at the time this report was written. Similar price action was observed in other USD-pairs, with USDJPY making a round trip from ¥119.18 to ¥118.88 and back again, and AUDUSD rallying to $0.8037 from $0.8000, before settling in at $0.8015.