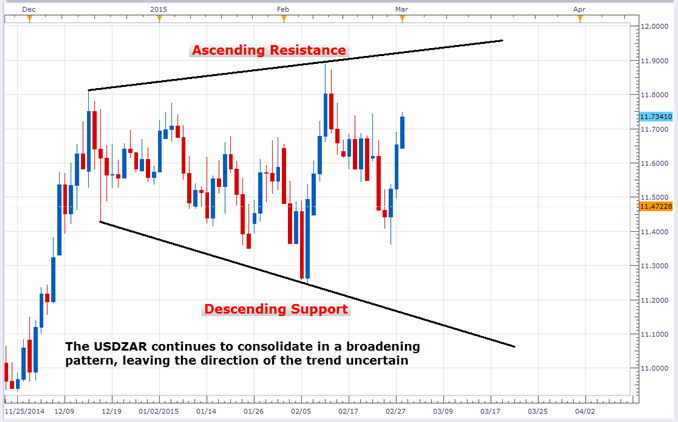 South Africa’s Kagiso Manufacturing PMI drastically fell in February in response to the prior month’s negative trade balance and declining Producer Price Index. The fledging figures are reflected in the value of the rand which has depreciated 3.4% against the US dollar since the data’s release.

The South African Revenue Service reported a trade deficit of R24.22 billion in January, up from the 2014 level R16.55 billion. The shortfall is explained by a 23.1% decrease in exports (valued at R67.08 billion) paired with a 13.3% increase in imports (valued at R91.30 billion). By category, export deficiencies were greatest among the precious metals and stones (-35.4%) as well as vehicles and transport equipment (-27.3%).

Not only was the trade balance deficient in the first month of 2015, but so too were producer prices. The annual percentage change for the price of finished goods in January was 3.5%, well below the 5.8% recorded in December 2014. Accounting for the annual decline, a 6.5% drop in in the price of petroleum, chemical, rubber and plastic products. A similar price movement is identified among 3 out of the 4 subcomponents.

As a result, the aforementioned trade deficit and drop in prices has not instilled confidence in the manufacturing sector. Last month, seasonally adjusted, the index plunged 6.6 points from 54.2 in January to 47.6 in February. As reported by the Bureau of Economic Research, the manufacturing sector is currently strained, as the index now resides below the expansionary 50 level.