All eyes are on Washington, D.C. this week as American and Chinese trade negotiators meet to end the US-China trade war. While news reports have already started to lower expectations for a broad, sweeping agreement, price action across various asset classes – bonds, commodities, stocks, FX – suggest that traders are still holding out hope for an ‘olive branch’ between the world’s two largest economies.

But before any significant trade developments are revealed, market participants will need to content with Federal Reserve Chair Jerome Powell and the September FOMC meeting minutes. Comments in recent days seem to suggest that the Fed rate cycle will cut deeper than previously envisioned.

Yet despite investors proving resilient in an environment proving increasingly hazardous, there are still many reasons why sentiment and rate expectations could turn on a dime. Even as US economic data has improved in recent weeks – the Citi Economic Surprise Index for the US is currently 19, up from -46.8 three months ago on July 10 – the US Treasury yield curve continues to suggest that traders are concerned about the state of global growth. 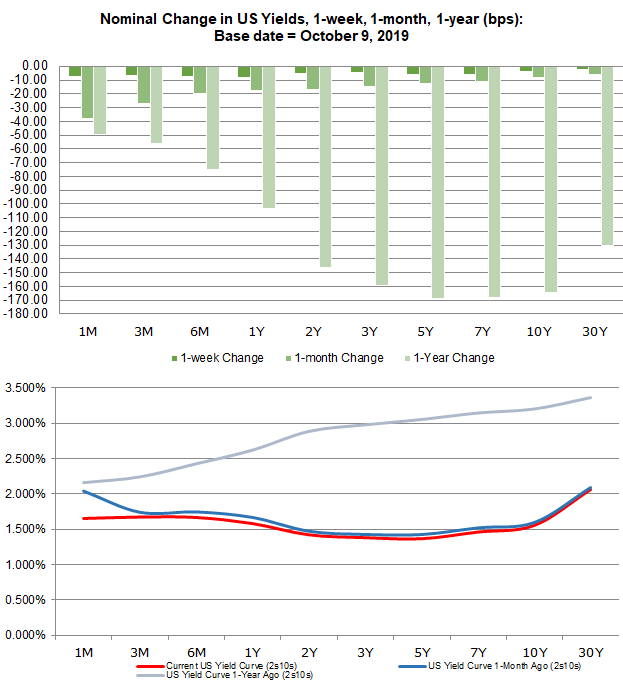 It still holds that the drop in both short-end and long-end rates suggest that investors’ expectations for the Fed’s rate cut cycle have been pulled forward over the past week. Given that the US Treasury yield curve is roughly in the same shape as it was one month ago, it can be implied that markets are still pricing in similar US recession odds.

There is now an 80% chance of a 25-bps interest rate cut at the October Fed meeting, according to Fed funds futures. If not, there is a 93% chance of the rate cut coming at the December Fed meeting. But if the Fed does indeed cut rates in October, then rates markets are pricing in a 53% chance of another 25-bps rate cut by the end of the year. 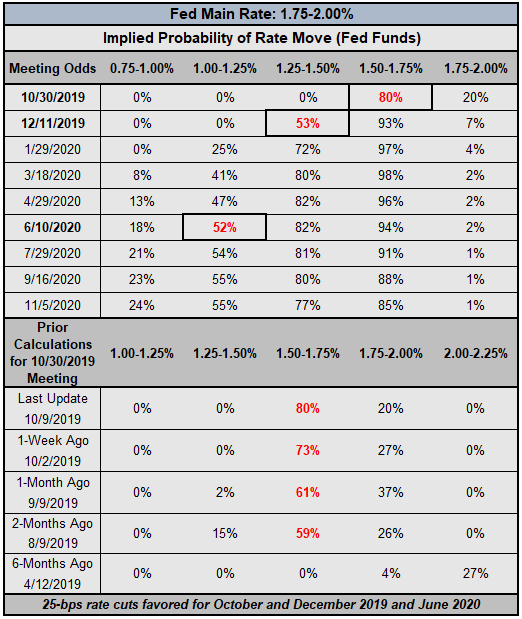 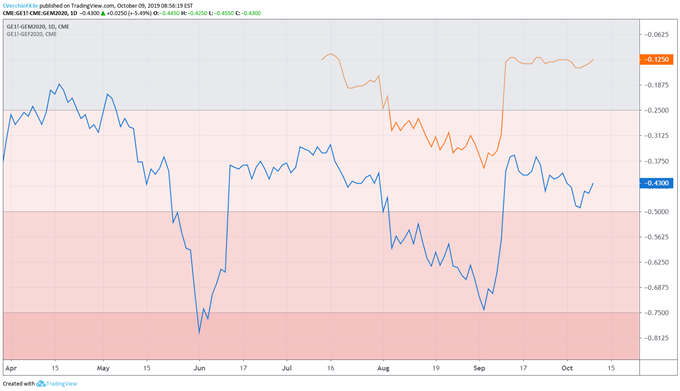 Based on the Eurodollar contract spreads, there is exactly a 50% chance of a 25-bps rate cut by the end of the year – much less aggressive than Fed fund’s implied probability of 93%. Through June 2020, Eurodollar contracts are pricing in a 72% chance of two 25-bps rate cuts; similarly, Fed funds are pricing in an 82% chance of two 25-bps by that point in time. Historically, wide gaps in rate expectations between Eurodollars and Fed funds leads to volatility in USD-pairs. 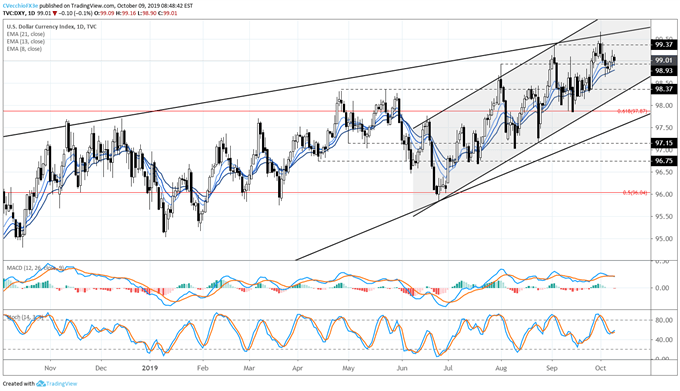 In our last DXY Index technical forecast update, it was noted that “further development is needed before a directional call can be made.” Unfortunately for traders, in the runup to the September FOMC meeting minutes, not much direction has been found by the US Dollar (via the DXY Index).

Last week, on October 1, the DXY Index pierced 99.37 on its way to a fresh yearly high of 99.67. But like on the first full trading days of August and September, the run to fresh yearly highs was marked by a bearish shooting star candle. To this end, the area where the DXY Index found resistance at the start of October was the trendline helping constitute resistance in the longer-term bearish rising wedge – an ominous topping pattern that persists.

For now, the DXY Index’s momentum profile remains neutral, if having a slightly bullish hue. Price is below the daily 8-EMA, but is trading above the daily 13- and 21-EMAs. Daily MACD has turned lower (albeit in bullish territory), while Slow Stochastics are hovering right around their median line. A close below the daily 21-EMA – not achieved since September 24 – may signal a greater likelihood of a turn lower. 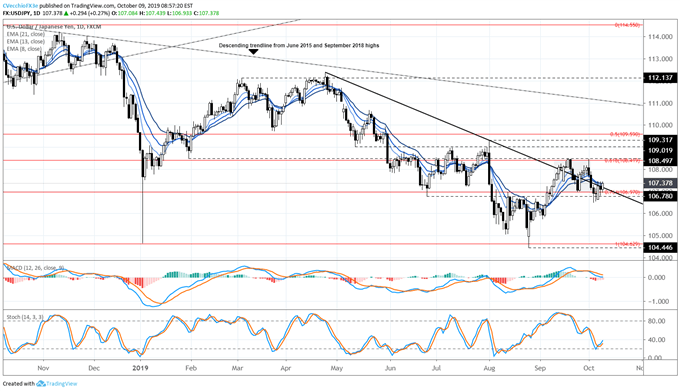 In our last USDJPY rate technical forecast update, it was noted that “a move below the weekly low at 107.45 would suggest a false breakout has transpired in USDJPY…It appears that the latter scenario – a false bullish breakout – has started to play out.” Appearances can be deceiving, and once more, USDJPY rates find themselves trading back within the consolidation.

USDJPY rates are attempting to return above the late-September swing low and 76.4% retracement of the 2018 to 2019 high/low range near 106.78/97 as well as the descending trendline from the April 24 and July 10 swing highs. The daily 8-, 13-, and 21-EMA envelope is in bearish sequential order, but USDJPY is attempting to close above the daily 21-EMA today.

Daily MACD’s turn lower in bullish territory is waning prior to dipping below the signal line, while Slow Stochastics have rebounded before falling intooversold territory. Like the broader DXY Index, USDJPY rates need more development before a directional bias can be ascertained. 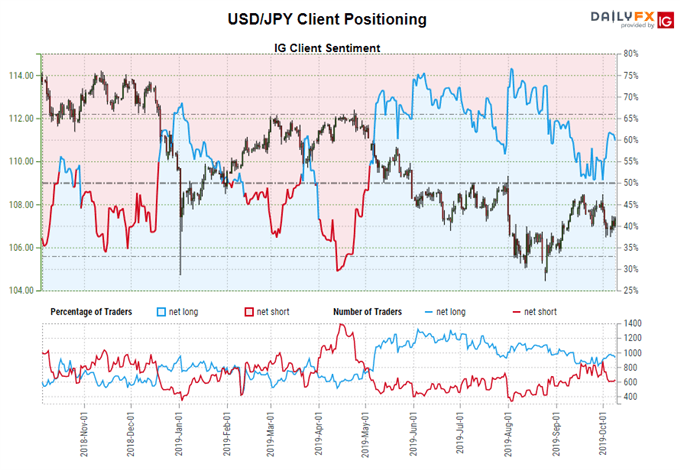